Yesterday, I wrote about how I thought that this winter storm was going to be a bit of a pushover, but apparently I was slightly mistaken. The storm dropped almost a foot of snow (so far) here in Tinton Falls in Monmouth County. One of my roommates had to go to work anyway, so I took a picture of him digging his truck out of the snow (below). 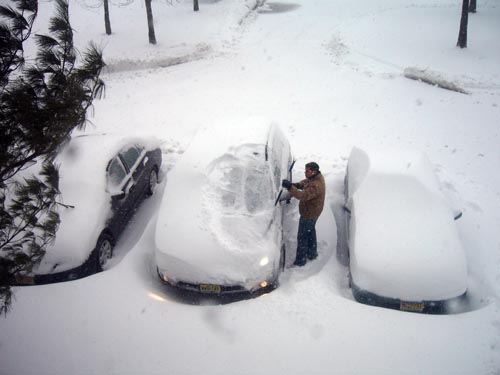 As you can see, as of about 10:30am this morning, the township hadn’t even begun plowing the streets. It’s pretty bad out there, but not so bad that I wasn’t able to dig my car out of the snow (you can see my car in the picture above on the right – it’s completely covered in snow).

So for those of you traveling around out there remember to be careful. It’s also probably worth thinking twice about whether or not you really need to be out on the road today, too.

. I’m a shareholder and a long-term subscriber and I sing the praises of the company whenever I can. Hell, I even include direct links to their products in my blog entries as you can see! With all of the negative buzz surrounding the company from its constant attacks by the internet media, I thought I would relay a brief, positive story about the company.

On Monday of last week, my Sirius XM

unit started showing a message saying, “Antenna Not Detected.” I hadn’t moved the unit or the antenna in many months so I wondered what the problem could possibly be. After some fiddling, the message went away and the unit worked fine. Then Tuesday came around and the message popped back up on the radio. I figured that some more fiddling would fix it – nope. I didn’t get mad, but I wondered what the issue was that was causing the problem.

I tried to self-diagnose the problem. On the one hand, I have a Sportster Replay, which is one the older, discontinued models and there was a chance that the unit was shot. On other other hand, though, I’ve only owned the radio for three years so for it to be busted after three years of use is unacceptable. I did some Googling and the information online wasn’t really clear about what the problem was (it could be the unit or it could be the satellite receiver or it could be something else – great). As it turns out, the satellite receiver was shot and I needed a new one, which was provided free of charge via a spare receiver that one of my roommates had (thank you!).

However, in the few days where I didn’t have Sirius XM

I had to listen to terrestrial radio on my two-hour daily commutes plus my driving around town. It was mostly miserable. You really forget just how many commercials there are on terrestrial radio until you have prolonged exposure to the endless drones of car, lawyer, and doctor commercials. And they don’t stop. Two minutes goes by, three minutes, five minutes, seven minutes – sometimes even more! It was horrible.

, I flip to one of the music channels. Easy enough, right? Well, with terrestrial radio when the talk show hosts would hit their ten to fifteen minute non-live content breaks I was essentially screwed! First, I had to find a channel with music on it that I actually wanted to hear. Second, I had to hope that the channel came in clear (my commute takes me across state and I generally heard more static than anything else). What aggravation!

When one goes a few days without Sirius XM

satellite radio, they begin to really appreciate how great of a service this really is for those who have long commutes. I’m so glad that Sirius XM

exists because other than NJ 101.5 (when it’s not on another ridiculously long commercial break) there is absolutely nothing to listen to on terrestrial radio.

As many of you probably know, last summer I moved from Deal, New Jersey to Tinton Falls, New Jersey – both in Monmouth County. My roommates and I rented a gigantic U-Haul truck and loaded it up with our stuff to make a few trips back and forth between the old apartment and the new townhouse. I’m not sure if I went over it at this site or not, but I was so out of shape that after about an hour and a half of moving stuff, I had to call up some of the undergraduates in my fraternity to come over and do the moving for me! Hey, I paid those kids good money and they did an awesome job loading and unloading my stuff for me (and my roommates).

Which brings me to a website that I came across the other day called MoveMe.com. MoveMe.com helps people who are looking to rent or buy homes, move to a new home, or look for finance to take care of their homes. It is what you’d call a removal company – in other words, this is a company that will come to your place, prepare removal quotes to move you from one location to another, and then do the actual move for you. Talk about a service that I could have used over the summer! MoveMe.com provides a man and van power for your move – in other words, they’ll get you the manpower and the right vehicle to make your move a success!

Now, I should note that this service is for my readers based out of the United Kingdom so be aware of that as you consider whether or not you want to use this service. If you head over to the MoveMe.com site you’ll notice that there is a very intuitive interface. You enter your current postal code and which postal code that you’ll be moving to and then their internal engine does the rest for you. And bear in mind – this is a free removal quote for your consideration. I strongly suggest that, when you plan your move, if you’re over in the United Kingdom you consider using a service like MoveMe.com…and I say this as the voice of experience!

Now that I’ve found this site, I hope to find similar services in the United States. Lord knows that the next time I move, I’ll need a service like MoveMe.com to help me get the job done quickly, efficiently, and professionally!

It never fails – there is a report on the news about a winter storm getting ready to hit New Jersey and this state loses its mind. I can understand if you’re up in Sussex, Warren, Morris, or any of the other northern counties. But if you’re in the most highly populated parts of Mercer, Monmouth, or Ocean counties, then you need to calm down. We never get blasted with huge amounts of snow and if we do, the snow melts relatively quickly.

One of my roommates works for Wegmans grocery store and he was saying how people were stocking up on all different types of groceries yesterday in anticipation of the coming snow storm. What folly! Folks, we live in eastern Monmouth County – we’re too close to the shore to have any significant, long lasting snowfall. Plus, most of the population in this area drive gigantic sport utility vehicles so you shouldn’t have many problems getting stuck in the snow!

But anyway, everyone be prepared because here comes another “storm of the Century!” Or at least a dusting of snow that scares the locals once again… 🙂

I haven’t had Baja Fresh in a few weeks and I needed a quick fix for dinner on Thursday night before I had to jump on a conference call. Seemed like an easy decision – I’d get my standard: nachos and a nacho burrito (no jalapenos). Well, the joke was on me because as soon as I was done eating this stuff, I immediately felt sick. In fact, I had to watch the tail end of the Vice Presidential debate while laying in bed because I felt so nauseous. I wound up passing out around 10:30pm – as soon as the debate ended – and I jumped out of bed at 12:30am for the first of six, long trips to my bathroom to dispel the Baja Fresh from my body.

At about 4:30am, I wound up passing out until 7:30am, when I woke up to go to a conference for work. Talk about the walking dead – I was a mess! I was pale, dizzy, and completely disoriented for most of the morning. In fact, I left the conference early so I could go home and take a nap. I woke up around 8:30pm and one of my roommates offered me some Gatorade, which helped to replenish my fluids (and electrolytes!). I only ate three, small dinner rolls on Friday and some Excedrin, if you count that as sustenance.

I felt a little bit better yesterday as the fever subsided and the nauseous feeling went away. I also ate more solid foods including a bagel with egg, rice and bean soup, and chicken noodle soup (picked up by my other roommate). I also ate a cup of fruit, which was really good.

Today I feel much better, though my body is still sore from the vomiting. At least my head isn’t spinning any more and I’m not constantly running into the bathroom! I’ll probably pop in a few more Excedrin Back and Body aspirin so I can get over some of this body pain. Also, I finished a big bottle of Gatorade yesterday so I might have to go out and get another one.

The morals of the story are 1) I’m never going back to Baja Fresh again and 2) there’s something creepy about cheap, Americanized Mexican food. The last time I had Taco Bell was about four years ago and the reason I stopped eating it was because I had a bad reaction to it one night. Granted, I don’t eat fast food any more and I haven’t had stuff like McDonald’s or Burger King in seven or more years now so I don’t have a proper frame of reference. I do know, however, that when I eat food that I make in my kitchen or that I watch prepared for me in a deli – I’m fine. Yet another reason to leave the crap food behind and move on to whole foods.