Last night, the Monmouth University Hawks fell to the Robert Morris University Colonials by a final score of 66 – 53 in front of 2,065 fans at the MAC Center in West Long Branch, New Jersey. The first ten minutes or so of this game was an incredibly low-scoring competition of speed and aggressiveness. Once both teams got down to business, though, the game was pretty competitive – which is a good sign for the Hawks who were playing without star center Travis Taylor. In Taylor’s place was Nick DelTufo who did a great job and will be a great starter for Monmouth into the future.

Before I go any further, though, I have to make a comment about the officiating in this game. And let me preface this comment by saying that I’m just a fan – not a sportswriter wannabe or someone who thinks that because he watches basketball he is an expert on the sport. I’m not. I’m just a fan who enjoys watching his team win. If you’re looking for an excellent sportswriter’s comments on this game then you want to check out Tony Graham at the Asbury Park Press’ The Hawks Nest blog.

Anyway, here’s my comment on the officiating. I know it’s cliche for fans of the losing team to point towards anything to justify why the team didn’t play as well as they could have or why they lost in the end. And it’s cliche for fans to point towards the officiating as a cause of the team losing. But the referees last night were so incredibly bad and so incredibly off with their calls that you had to believe they were playing a joke or something. I played highly competitive sports in high school and while it’s a whole different world from college, I understand that these student athletes are putting in a lot of time and effort to prepare to play against (and beat) their opponents each week. But how does a coaching staff or a team of student athletes prepare for horrendous officiating? You can’t prepare for that – it’s impossible.

When I got home from the game I checked the DVR of the game (it was on the MSG Network) and there was an interview with the Commissioner of the Northeast Conference who was apparently sitting somewhere near me. I have to imagine that the Commissioner of the NEC was a little disgusted with that type of officiating. She mentioned in her interview that she wants to get the NEC brand out there to other parts of the nation. Well, that’s great, but you want to make sure that the image presented is one of two competitive teams putting out great performances – not one of two competitive teams trying to play around an inept officiating staff.

I missed Thursday’s game because I was teaching and it was nice to be back in the MAC Center to watch the Hawks play. It was also nice to see the Shadow Nation fans back in the stands supporting their team (the entire student section was pretty much barren during winter break).

As for the game itself, I thought that the Colonials were overly aggressive and somewhat classless for most of the game. Their players were playing pretty dirty away from the action (which is smart since the referees weren’t paying attention). That said, they’re a pretty strong basketball team with some good field goal shooting. The Hawks couldn’t hit a field goal or three pointer all game last night – it was terrible. And the same was true of the Colonials. In Graham’s blog entry on the game, he quotes the RMU Head Coach Mike Rice who joked that he wanted to fire his shooting coach at half-time.

There are almost 30 pictures from different aspects of the game last night (including some of the non-game stuff going on, like me taking pictures of my friends from across the court). Enjoy. 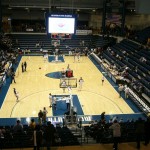 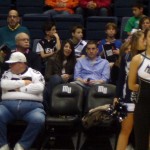 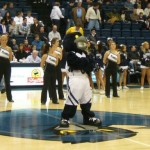 Shadow and the Dance Team 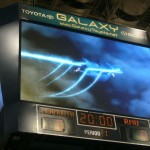 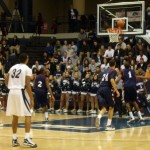 Waiting for the Rebound 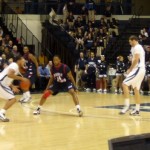 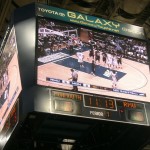 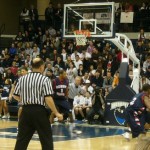 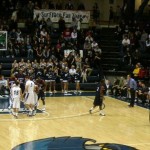 Alternative View of the Game 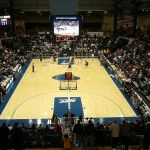 Shot from the 3rd Floor 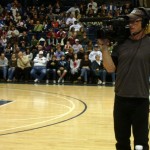 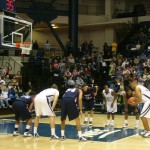 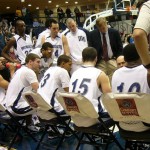 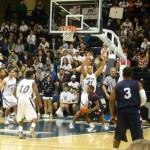 Hawks and Barbour on Defense 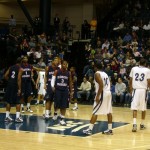 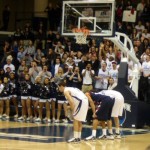 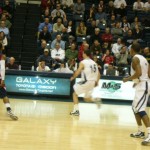 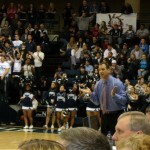 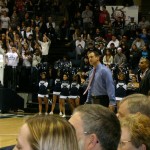 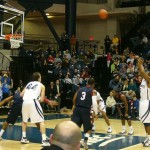 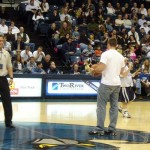 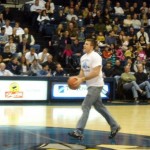 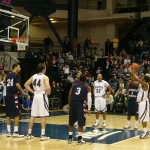 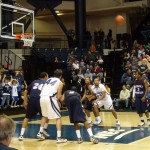 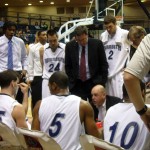 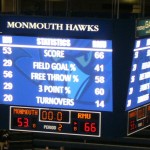 What I’ve noticed so far watching this game is that the Giants aren’t performing like the defending SuperBowl champions (except Brandon Jacobs, that is) and the Eagles aren’t capitalizing on this opportunity. Seriously – who gets a safety? I digress. This game is competitive, but it’s competitive at a lower level than I would expect in the playoffs.

The Giants have not been creative enough in their play calling and with Eli Manning having a so-so game so far, it would be a good idea for Kevin Gilbride to pull some type of card from up his sleeve. I’m not talking about trick plays because I hate that shit in the NFL, but something other than Jacobs this way and Jacobs that way.

The other observation I have about this game is the penalties. I hate when the referees become a third team on the field. Let the Giants play the Eagles and stay out of the damn way, for Christ’s Sake. There’s nothing worse than when two good teams like the Giants and Eagles get together and the game is marred to any degree by the officiating staff.

Anyway, here’s hoping for the Giants to rally and take control in the second half!