Many years ago as an undergraduate, I was an English major, which means I spent a great deal of time reading the classics, writing critiques, and reviewing the finer points of the art of writing. Most of those finer points that I spent a untold hours (but quite told dollars) to learn are probably gone from my knowledge bank at this point. I don’t know because I can’t remember. I guess this means that I have a more relaxed writing style than some of my old professors may care for. Oh well. I certainly won’t find many arguments against a more relaxed, but disciplined writing style from Benjamin Dreyer. In his new book, Dreyer’s English, Dreyer goes over a whole host of writing rules that authors (aspiring, experienced, or otherwise) will find helpful, eye-opening, and – at times – potentially frustrating. 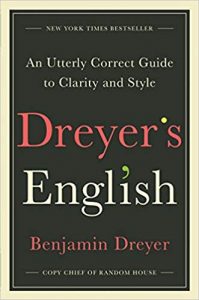 This is not to insinuate that Dreyer is incorrect in any of his suggestions, recommendations, or rules. Rather, this is to suggest that contemporary English has become so out of whack with the basic rules that we sometimes write in a piecemeal method akin to how Dr. Frankenstein built his monster (shout out to anyone who has read Dreyer’s English).

What struck me while reading this book was the fun, playful humor that Dreyer embeds into an otherwise dry, drab, sometimes angry subject. Some of you may recall your English classes as boring or dull or, worse, instructed by someone who was either of these two unfortunate descriptors. I’m glad to say that I did not have that experience (and thus, I graduated with a bachelor’s degree in English). But I do feel for those of you who may have had poor instructors and now are plagued with a poor appreciation for the rules of our English language.

Perhaps my favorite part of the book – and a comment that I agree with – is that rules are made to be broken. Of course, you have to know the rules before you break them. I’m with Dreyer on that stance. Yes, go ahead and end a sentence with a preposition if you want to. However, be sure to know what the rules are around why some folks don’t like to have sentences end with a preposition.

For those of you who underwent a rigorous education in the grammatical arts, you’ll find Dreyer’s English to be a great refresher and also a fun trip down what I hope is a pleasant memory lane. For those of you who are not as familiar with the strange peculiarities that make up the English language, you might find this book to be filled with the rules and grammatical laws that have evaded you. Or a playful read. Or both. Whatever. (Another shout out to those who read the book and its fun footnotes.)

Just a final comment, while this book is a fun read and enjoyable for those of us who like linguistics, I was a bit disappointed at the unnecessary distraction added by the often awkward and off-topic insertion of the author’s politics. Early in the book, he takes a shot at the Bush family. Later, he uses Donald Trump, Jr., as an example in a rather derogatory way. He swipes at President Trump in a footnote that looks, feels, and reads laboriously crowbarred into the book. There are other awkward shots at anything not Democratic or left-of-center littered throughout the book including a bizarre footnote where he comments that he originally used the verb “trumps” in an example but he now has an aversion to using that verb. Frankly, it’s creepy for someone to see politics all around them, including in verbs. Break free, people. Don’t let politics run (ruin?) your life.

These types of unnecessary political distractions are awkward in a book about the English language. Of course, part of my frustration with politics being included is that I vehemently reject the politicization of everything in today’s society. The English language should not be politicized. Excess fall backs to political commentary is also why I followed and then, sadly, stopped following the author on Twitter.

The whole world doesn’t need to be political. And, this may be just me, but I’ve begun to become uninterested* in people who only see the world and all of its marvelous elements in shades of Democratic blue and Republican red. Do better, everyone.

*A third shout out to those who read the book. I am uninterested in those who see politics in all shades of life, even linguistics. This is because I am disinterested in politics. There’s a difference, as Dreyer explains.

That unhappy note aside, I’m a fan of this book and I appreciated the humor that Dreyer used in his writing. This was a fun read and as someone who never picks up a brand new book, I am glad that I broke with my historical book-buying approach and purchased this one. If you’re into the English language and its many oddities, then give Dreyer’s English a try. I think you’ll enjoy it!

Way back in December I asked GGL to come on here and explain to everyone what “pwned” means. He did such a good job, that I’ve asked him to come back and explain just what “meh” is all about:

“Meh” is both a word and a phrase all wrapped into three glorious letters. Its meaning is much more involved, but the word serves as an easy response to convey indifference. “I am no longer interested in this portion of the conversation,” or “I don’t care to even respond or continue,” some may take the time to write out. Not us, the meh generation. We can tell you everything you need to know with 3 simple letters: M-E-H.

This is the best new word in a while! Meh.

My thanks go out to GGL of 4DaysRest.com for bringing such engaging content to JerseySmarts.com!