Sometimes, you come across a video and it strikes you as something that you have to share with the world. I came across the video below over the summer and shared it with my roommate and another friend. We each got a kick out of it, but the truth is that the video comes up in conversation time and time again. I have a large number of male and female friends who are engaging in the boring, prescribed lifestyle seen throughout this video. Anyway, take a look at the video below – it’s only a few minutes long.

If you’re someone who isn’t so full of their own shit that they can no longer recognize reality, then there is a strong chance that you know some people who can fit very easily into any of the stages of this video.

There are a growing number of blogs out there that are collectively described as the manosphere. Within the manosphere, there are blogs that focus on traveling, dating, socializing, investing, and any other number of topics, but they view these activities (and life in general) from a liberated man’s point of view. This liberation is something that the manosphere calls taking the “red pill” (think of Neo’s choice in The Matrix). In other words, the guys who write these blogs have willingly chosen to shed the hateful, spiteful cloak that modern society places on men (particularly young, intelligent men). They see interactions at the office place for what they are (mostly meaningless opportunities for people with nothing to say to waste your time), they see interactions with 99% of women for what they are (a chance for the girl to feel slightly better about herself at the emotional and psychological submission of the man), and they see the world for what it has become (a place where intelligent, young men are held down by reverse racism, reverse agism, reverse sexism, and anti-intellectualism among other -isms).

I read these blogs for enjoyment and to pick up a good tip here and there (the money, working out, and traveling blogs are exceptional), but I also read these blogs because they are a growing island of truth and reality in a world otherwise filled with bullshit. Once you understand that the world is fabricating a reality that doesn’t really exist (like perpetuating the suggestion that women can compete equally with men in physical competition – no, they can’t; we’re stronger, period) you begin to see examples of that bullshit all over the place. And while I’ve been noticing this for many years (see any of my rants about how I’m saddled with ridiculous student loan debt while certain other demographics are not), what I’ve been noticing lately is that there is an unconscious acceptance of the fabrication that permeates our society. There is an unconscious acceptance of the sad, pathetic life plan presented in that video. Parents expect it of children because that’s what they’ve been bred to believe is acceptable. Siblings expect it of each other because, well, why wouldn’t you get married, buy a house, and have kids sooner rather than later?

We’ve beaten down men to such a point in our society that they believe the life path in the video above is acceptable. For some people, this life path may be just right. However, for the vast majority of men out there – they want something else. Want proof that they want something else? Fine. What’s the divorce rate again? Isn’t it continuing to climb above 50%? Unfortunately, many young men only rise up from their beaten down state of mind after they get married (too young, too broke, or too not really in love). Even at a relatively young 31 years old, I know a growing amount of people – who are younger than me! – who are in the process of getting a divorce or who are already divorced. That’s an incredible statistic and there is definitely a post or series of posts that I could write about all of this information.

Anyway, I’m posting this video because it makes me laugh. I don’t just laugh at the humor in the video (it is pretty funny), rather I laugh because I actually know people who are willingly sprinting, not walking, down this path. The poor fools don’t know any better. They simply can’t or won’t recognize reality even as it smacks them in the face. Spread this video among your friends (man and woman alike) – maybe if enough people see the grim reality of their lives through the scope of humor, they’ll begin to understand that they need to break free from what society has subconsciously prescribed for them.

Good morning everyone and Happy Thanksgiving! This year, I thought that I’d share a creepy Folgers coffee commercial that I can’t believe was approved to make it to air. I’ve seen this commercial on several occasions in the last week and it just played on the television next to my laptop, thus this entry. Go ahead, take a look at the supposed-to-be-sentimental commercial below and then scroll down to read some of my very brief thoughts on this debacle.

Did you notice how the brother really didn’t know how to react around the 37 second mark? You would think one of the dopes at Folgers would have noticed the actors reaction and thought, “Hmmm… that doesn’t look right.” That is, of course, unless the director of this commercial is into creepy familial relations. Gross.

Last night, both Governor Mitt Romney and President Barack Obama attended the Alfred E. Smith Foundation’s annual charity event. The event raises money for children living in poverty and every four years it hosts both Presidential candidates. The candidates are asked to offer some lighthearted jokes about one another at the event and last night, Romney did not disappoint. Here’s a video of his roast of the President:

Pretty entertaining if you ask me. I hope you enjoyed the video!

Sometimes I see something while I’m walking through the store and it makes me stop in my tracks, do a double take, and wonder to myself, “Wait… what was that?!” A few days ago when I was walking through the local Walmart I had one of these moments, though I admit the reaction was delayed by a few seconds. Take a look at this picture and try to figure out what the problem is here: 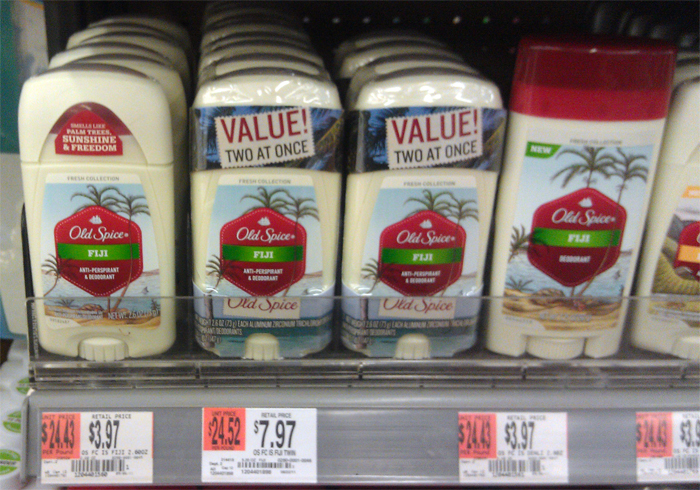 Take a look at that picture - something ain't right about this "value..."

Did you pick up on the problem with this “value” that they’re promoting? No? Go ahead, take another look.

Let’s go back to basic, elementary school math for a moment. If one stick costs $3.97 and two sticks cost $7.97, which deal costs less per stick? Hmmm… well one stick costs $3.97 – we know that already. Now if two sticks costs $7.97 then we’d have to divide that amount by two, which would give us $3.98 (and a half cent) per stick. Well, that doesn’t make any sense does it? Aren’t we supposed to be getting a better “value” for the two sticks? This math seems like the consumer has to pay more by getting the special “value” offered at the friendly, neighborhood Walmart.

Can’t be right. Let’s try this another way.

So we know that one stick of the deodorant costs $3.97, but let’s say that I wanted to leave Walmart with two sticks of the product. Well, this one seems simple enough right? Just grab the special “value” and go about my business. Or… wait a moment here… if I can get one stick for $3.97, then what if I bought two of those one sticks? That would be $3.97 + $3.97 = $7.94 for the two sticks.

Do you hear that, Walmart and Old Spice? Your special “value” costs 3 cents more than simply picking up two of the same product! Come on, guys! Get with the program already! How could someone let this slip through the cracks?

And I know what some folks out there on the interwebs would be thinking after reading this; they’d think, “Calm down, Joe. It’s just a simple oversight that will probably get fixed in a matter of days.” Well, that’s true, but what bothers me in this situation is the marketing team at Old Spice. Simply put – these guys are pushing the Fiji flavor of their body wash, deodorant, and body spray more than I’ve ever seen them promote anything else. I mean, take a look at the front page of their website: 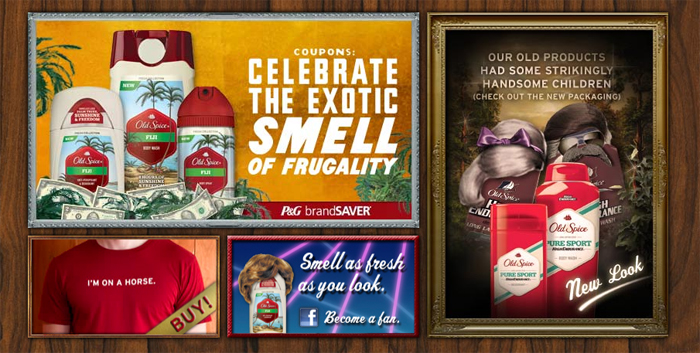 Trying to push a failing flavor much? Give it up already.

How many times can they slap that wretched Fiji stench on their website before it becomes ridiculous? It’s even worse in the stores. Every Christmas box set that I see from Old Spice in Wegmans or Walmart is jam packed with the Fiji flavor. Not the Komodo flavor or the Denali flavor or the Cyprus flavor; not even my personal favorite flavor – Matterhorn. Nope, all you get from Old Spice this holiday season is Fiji.

And I think I know why they’re promoting this flavor so much – it’s just not that good.

It’s not. When you smell the Fiji flavor something just smells wrong about it. There’s the wrong mixture of… I don’t even know. Sweetness and a biting stench are the only two adjectives that I can think of to describe the smell. It’s just not that good.

So here’s hoping that the folks at Walmart and/or Old Spice catch this mistake in their pricing model and fix it before they look even dumber than they look already. And here’s also hoping that Old Spice will stop trying to push a stench that the people have clearly rejected. If they were putting Matterhorn or Komodo (or any other flavor) out there in these box sets, they’d all be sold already. But no. Instead, we get Fiji.

Normally, I don’t share clips from television shows on this blog. It’s not because I don’t watch much television, but rather because I just don’t have a lot of time to watch the clips to see if they are funny or not. However, I saw this clip from Conan posted on the internet the other day and I had to share it. This video is of Triumph the Insult Comic Dog taking on the entire Occupy Wall Street situation from the bankers to the protestors to the media. Absolutely hilarious – enjoy!

Ha ha ha! I hope you enjoyed that clip!