The first thing that you need to know about this book is that it must be read in an active manner. In other words, since the information in this book is based on observations generated during academic research, it is like you are reading cleaned up field notes. You will need to pay close attention to what is going on in order to keep pace with the different individuals, their relationships, their family connections, their preferences, and so much more. 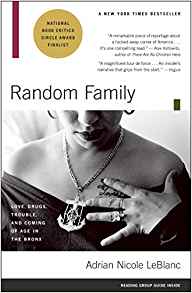 And that is what Random Family is all about – how hectic and random life can be for folks living at a certain income level and under certain economic conditions. At a time in our country when we are seriously considering shifting scarce dollars from police departments to other, community-based resource initiatives, the story of Cesar, Coco, Lourdes, Jessica, and everyone else in the book is more relevant than ever before. Author Adrian Nicole LeBlanc writes about these individuals, their histories, their intertwined families, and how they make it through life, one day at a time.

Cesar’s story was one that I found particularly engaging. He winds up in jail for a few different reasons, not the least of which was murdering his best friend (accidentally). Coco falls in love with him (at age 15!) before he is locked away. Coco has two children with Cesar (and three children by other men; totaling four girls and one boy in all) and much of LeBlanc’s story weaves into how this blended family struggles to survive. They live in one place, get evicted, stay with friends, get kicked out, etc. It is incredibly difficult for Coco to put down roots for her family for a variety of reasons not the least of which is the tenuous struggle that they are engaged in as non-contributors to an economy that insists on a clean record for participation.

At times, it becomes frustrating for the reader because you just want to reach out and find a way to help the family.

Back to Cesar – he fits the archetype that you hear about so often on the news and in documentaries. That is, he lives the typical life of a young male in an urban neighborhood, but there are real consequences to being so aggressive in trying to prove one’s masculinity. He is a man who is both left alone to grow up on his own and then essentially left to rot in a penal system that does not help him grow and mature as they should. Again, the reader becomes frustrated with this element of the ethnography because you want to just find a way to help Cesar and his expanding family by guiding them to make certain choices over others. But that is what ethnographies are for, right? To show the world how people live and survive in their environment.

Ten years after the book was published, LeBlanc was interviewed by the New Yorker as an update to her initial ethnography. For those of you who have read Random Family, I recommend reading this interview. It provides a little bit of insight into LeBlanc’s approach to recording notes, though it generally does not give an update on the individuals that you meet in the book. Still, as soon as I was done reading the book, I searched the internet for some sort of update on the people that you learn so much about during Random Family. Sadly, I could not find an update on these folks, but then again – that is the way that a book like this one is supposed to work.

You read it, learn about their lives, and then it is over.