Oh man… this was a tough read, but not because it was poorly-written or anything along those lines. In fact, the exact opposite is true. Author Sam Quinones did a brilliant job of writing about the opioid epidemic, where it came from, how it grew, and what direction it seems to be headed in. 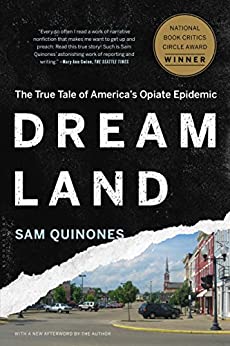 A number of years ago, I remember the first time I heard someone say, “Everyone knows someone who has been impacted by the opioid epidemic.” And I thought to myself, “Hmmm, that doesn’t have to be true for everyone, right?” Well, after reading this book and living my life for a few years, yes, I think that this statement may be true for everyone. I know that one of my close friends from high school battles an opioid addiction to the point where they tried to take their own life. And that’s just one person that I know who is battling the addiction – there are many more, unfortunately. It is a horrifying drug no matter what form it takes, but the way that Quionnes wrote about how black tar heroin made its way across the country is the stuff of medical nightmare tales. There is a lot to write about in reviewing this book, so I want to just focus in on two elements that Quionnes writes about: the corporate nature of the structure for the drug dealers out of Mexico and the misinformation that was promulgated about the pros and cons of using opioid-based drugs for pain management. Also, since I read this book on my Kindle, I was able to highlight some lines in the book, a few of which I will include below. Of course, the highlights that I include below are just scratching the surface of a much larger discussion on these (and more) topics in the book.

“Without legions of middle-class kids with cars, the Xalisco Boys’ business model didn’t work. In cars, kids shot up, gave rides to fellow junkies, hid their dope. When their parents’ trust in them finally died, the kids lived in these cars, and the cars became their private bedrooms.” Dreamland goes deep into who the drug dealers were, where they came from, what brought them to this type of life, etc. That quote, from Dreamland, gives great insight into why the business model worked in middle-class neighborhoods. They operated what looked and felt like a franchise-style business. They would set up a cell in a city and then arrange the cell to be the quick delivery service for drugs directly to your door or, in the case of these middle-class kids, at a prearranged drop off point. Nothing different than ordering food for delivery, and it worked like a charm.

“To actually look up Porter and Jick, to discover that it was a one-paragraph letter to the editor, and not a scientific study, required going to a medical school library and digging up the actual issue, which took time most doctor’s didn’t have.” Earlier in the book, Quionnes exposes that the “research” on which much of the pain management movement was based on was not an academic or scientific study. No, instead it was an obscure letter to the editor that was never intended to even be sent out. This irritates me to no end not just because it exposes that the basis on which doctors began prescribing, and big pharma began producing, opioids was false, but it irritates me because this type of false authority runs rampant in a variety of worlds outside of healthcare. The social sciences are plagued with people taking data and findings that are not generalizable and then generalizing that information to “prove” their points. But that’s a story for another day. The point here is that Quionnes uncovered that the scientific roots of mass producing opioids to address pain management are false. And that is infuriating.

And, finally, I have to offer this quote from Dreamland to end this review: “He was a football player and handsome. He was a linebacker and a ferocious hitter, and thus popular. So a lot of what he did was forgiven and he got used to that. Football players were common among the new rural opiate addicts. Some got addicted to pills prescribed for injuries. Others, like Wes, took them at parties.” Sometimes you’re reading a book and you come across a few lines like these that hit home. I know a few guys who played football both at the high school and collegiate levels and they fell into this exact trap. Life was easy, they got away with things that other people would have been sanctioned or punished for, they took a few pills maybe took a few shots, and that was the end of it. And because they did it, others did it, too. Absolutely horrifying.

And that is Dreamland, folks. Overall, it is the story of the horrifying opioid epidemic that took hold of the people in this country, regardless of age, socioeconomic status, ethnicity, etc. Here’s hoping that the reform efforts that are currently underway continue and are bolstered with more funding.