In my constant quest to find high quality journalism, I often find myself reading articles from the New York Times. Granted, I have little to no use for their ultra biased opinion/editorial pages (read an inside view from their former editor) and I sometimes find that bias seeping into their political news. However, their non-political reporting is, in my opinion, among the best on the planet. They also have an army of reporters all over the globe covering all different types of topics. If you’re looking for someone covering the impact of pine needles covering the northern reaches of a certain forest and how it impacts local fauna, chances are that the New York Times has someone covering that topic.

Before I subscribed to the paper (to be clear, I did wind up subscribing to the paper), I came across the fact that their special academic rate… actually costs more than the regular rate! That’s right, if you’re trying to get a discount because you’re an educator, then do not hold your breath because there is no discount offered. In fact, you will pay more for an all-digital subscription (see the chat screen shots below). 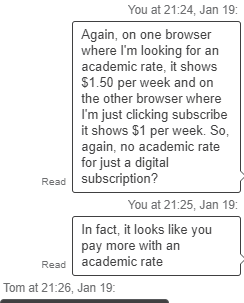 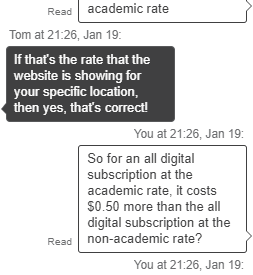 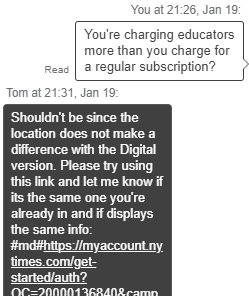 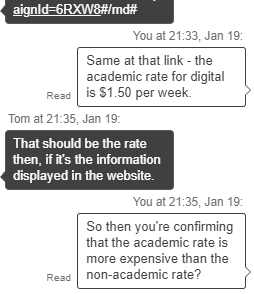 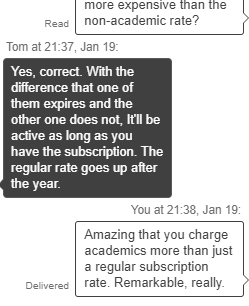 Believe me, I want to be outraged by this, but at the same time and as I noted above, I went ahead and got the subscription anyway. I want to give it a shot, especially since their non-political reporting remains among the best on the planet. And for those of you who think that the New York Times makes everyone who reads it an extremist – stop it. I also consume quite a bit of right-leaning media sources as well as an increasing number of high quality independent and nonpartisan sources, so this subscription is just helping to round out my overall media consumption.

Looking to increase your “culture” intake this summer? Why not go out and see the new musical The Toxic Avenger!? Seriously, this musical is getting some award nominations including some from organizations such as the Drama Desk Awards, the Outer Critics Circle Awards, and the Drama League Awards. Seven nominations in total – pretty damn good!

The performance schedule for The Toxic Avenger is Monday, Wednesday, Thursday, and Friday at 8PM, Saturday at 2PM & 8PM and Sunday at 3PM & 7PM. Tickets are $51.50 & $71.50 and may be purchased through TeleCharge at (212) 239-6200/www.telecharge.com. However, the good folks over at the Toxic Avenger musical have offered to give readers of this blog a discount on ticket prices through July 31st, 2009. If you use the code TOBLOG409 or click on this particular link to purchase tickets, you can get them for $45!

I’m hoping to clear up some space in my schedule to get into New York City to see this musical (and not just because the Toxic Avenger is New Jersey’s first superhero!). The reviews on this play have been great including reviews from the New York Times and the New York Daily News. Anyway, if any of you get a chance to get over there and see the show, let me know!