Last month, I had a chance to visit a place that I’ve contributed quite a bit of money to over the last few years – the United States Department of Education (USED) in Washington, DC! Okay, so while most people would find no humor or excitement in going to the USED, I found some great sense of fulfillment by actually visiting their headquarters building in our nation’s capital.

The one thing that struck me the most about the headquarters building is that it’s pretty much a fortress. I mean, it’s built like it could withstand any major natural disaster or attack. I honestly think that if a foreign country attacked the capitol, the USED building would be left standing – mocking the foreigners and their wimpy weapons. But that’s just the impression you get from the outside. Once you’re inside you see that it’s really just functional office space. I liked the mission statement of the USED, which was put up right on the wall for everyone to see when you entered the building. Take a look: 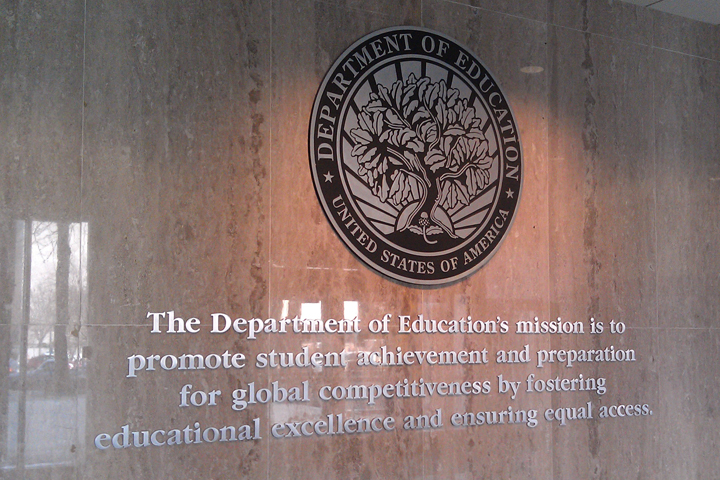 The USED's mission statement - give it a read

Pretty good mission statement for the USED, huh? I was down in Washington, DC for a conference on charter schools which I won’t get into in this blog entry. However, I couldn’t help but think that I actually helped build the impressive structure in which the charter school conference was being held in thanks to all of my student loan payments. It was a weird feeling – not necessarily a bad feeling, but one that made me take a step back and think, “Well, here’s the place where my checks have been going for the past few years.” It was just an interesting feeling.

What was not a good or interesting feeling, though, was the physical pain that I endured as I rode Amtrak’s Acela down to Washington, DC. Believe it or not, these asshats actually sold more tickets for the Acela than there were seats for the passengers. Sure, you’ll never get any official response from the Acela people saying that it was standard practice to do that or that they were sorry (apologizing is an acknowledgement of guilt). However, the conductor on the train – who was a very nice guy, by the way – told me and the fifteen other seatless passengers that this was common practice. It was outrageous. So, I rode down to the nation’s capitol sitting on this: 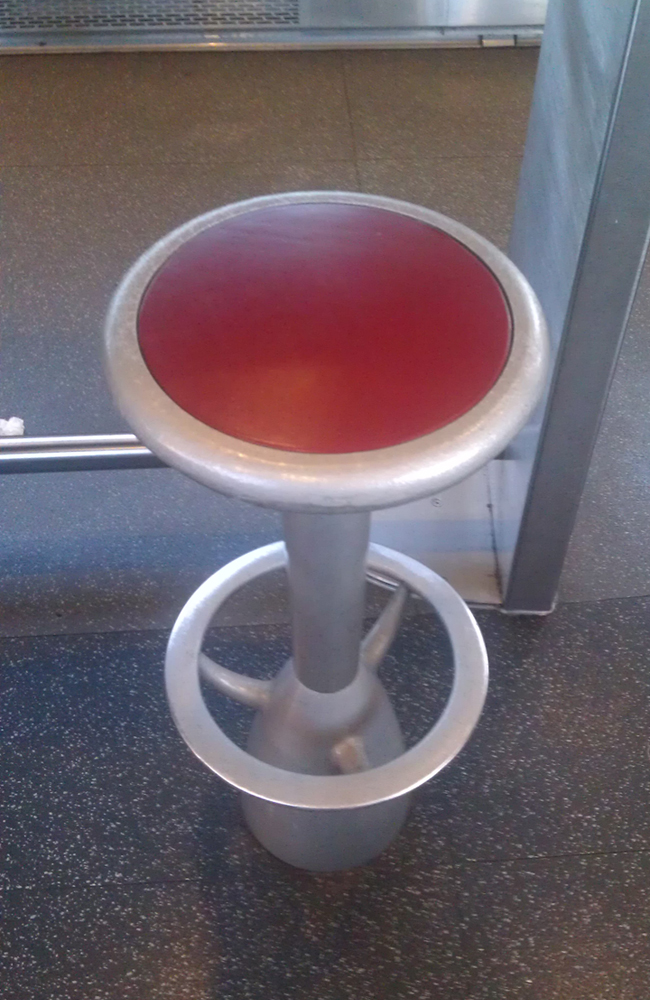 Imagine sitting on this for two and a half hours

Yeah… not comfortable at all. Anyway, I visited one of my two major student loan lenders last month. And while I don’t think that I’ll ever willingly or happily visit the headquarters building of the New Jersey Higher Education Student Assistance Authority (NJHESAA), I’m actually going to be really close to some of their associates starting tomorrow. Turns out that NJHESAA and my company will both be exhibitors at the New Jersey Charter Schools Association conference in Atlantic City this week. I don’t know if we’ll be anywhere near each other, but I feel like being in the same room as those people is going to drive me nuts. Frankly, I have half a mind to walk up to their booth and ask them why they felt the need to treat a highly intelligent, good-natured person (me) like a dumb, moronic piece of garbage every time I called them. And that same half of my mind wants me to ask them why they wouldn’t contact the credit agencies to report their mistaken even after admitting that they made a blunder when they reported that I made a late payment when no payment was actually due. Those idiots lowered my credit score for a few months until I had to go out of my way to get that stupid mistake wiped clean from my record. Idiots.

Anyway, enough of that tangent. The point of this entry is that I visited the USED headquarters building in Washington, DC and I was pleasantly pleased with the visit. I hope that they do their customers well as they continue to ramp up their student loan production.

Something seems wrong about posting the interactive game below just minutes before I leave to go to Atlantic City for my buddy’s bachelor party, but hey – that’s how things work out sometimes. Anyway, the National Center for Responsible Gaming sent me the game below to post with the hopes that some of you might take a few minutes and play. If you give the game a shot, be sure to post how you did and what you think of it. Thanks!

Please note that clicking the image below will take you to a different website.

Atlantic City casinos have been hit with a double whammy of late, and many are questioning exactly where the silver lining or future hope may lie for. Casino revenues have slid dramatically year after year as rival casinos opened in Pennsylvania and New York, with no real response from either AC casinos or the state of New Jersey, other than to cross their fingers and hope that the economy and situation magically improves.

While Las Vegas is in a similar situation and battling declining gambling revenues it at least has other revenue streams to fall back on, including the ability to cross-sell many of its offering such as MMA fights, which draw a steady stream of fans to Vegas to both attend the events and place wagers in sportsbooks. With no sportsbooks to fall back on more dated casinos and hotels in general, it’s a much harder sell for AC casinos to cash in on MMA mania.

MMA isn’t a magic bullet for casinos but it’s a step in the right direction, as far as getting out of the old-school mentality that all a casino has to do is cram in a lot of slot machines and table games in order to be profitable. Casinos have to fight harder for the dwindling entertainment dollars that customers are willing to spend, especially as more and more players embrace online gaming sites where they can play real money blackjack and other casino games without ever leaving home.

While recent steps by the New Jersey legislature to allow smaller boutique casinos in more locations and implement an intrastate online casino site are steps in the right direction, it remains to be seen if it’s a case of too-little, too-late for gambling in Atlantic City. With newer, slicker options available on nearly every front, it’s becoming a harder and harder draw to convince customers to come to Atlantic City to spend their gambling dollars.

Back again with some poetic thoughts about Atlantic City is Joseph P. Martino of Millburn, New Jersey. Some people might consider the poem below a bit of a sales pitch for Atlantic City and, you know what? That’s just what it is! So, take a minute and read Mr. Martino’s poem about Atlantic City – Unconventional.

“ATLANTIC CITY UNCONVENTIONAL”
DEF: BEING OUT OF THE ORDINARY

Atlantic City new jersey by the sea,….the ideal place to see and be.
a great resort to spend your vacation or visit for a day, easy to reach and only a short trip, away.

come by auto,bus, rail or sea, centrally located between New York and Pa.

Make Atlantic city deluxe hotels and casinos your second home and destination don’t think twice before you book your hotel reservation. You will love the luxurious accommodations.

enjoy the casinos, shopping, restaurants and all other attractions and activities you will find along the board walk, beach, marina or the bay. Welcoming hotel staffs will help make your day.

Come roll the dice, to add some spice. Forget all your woes, worries And troubles,….as your champagne flows and bubbles.

catch the nightlife and entertainment at our caberets, clubs, lounges and casinos and don’t forget that championship fight.

allow atlantic city, the jewel of the new jersey shore to be your perfect host 24/7 for all your entertainment,leisure, enjoyment, business, pleasure and conventions needs.

Have a great day!

Tomorrow I’ll be heading to Atlantic City and staying the night in the Sheraton Conference Center Hotel. This trip is for the annual Governor’s Housing Conference where I get to hear Governor Jon Corzine talk about how New Jersey needs more moderate and affordable housing (we know). This year I’m sure I’ll also have to endure through a re-election laden speech, but so be it.

So…I’ll be back in a few days. There are pre-written posts ready to be uploaded while I’m gone. Enjoy!