Over the years, I have reviewed the first and second books in author Stephen Martino’s Alex Pella trilogy. For information on the two books that predate the one reviewed here, I encourage you to go back and read those two reviews or – better yet – go read the books themselves. 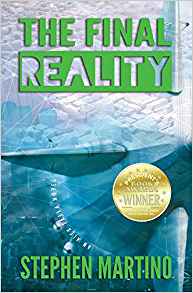 The Final Reality is a captivating, fast-paced action/thriller that pits two geniuses against each other with the fate of the world in the balance. If you have not read the first two books in the Alex Pella trilogy, then you are missing out on one of the most powerful displays of what this world’s future may look like under unchecked authoritarian regimes. What is frightening is that the early footprints of these regimes are readily evident in today’s geopolitical landscape. National debts rising out of control, a desire to disrupt the spread of free thought and free speech, being instantly shut down when trying to keep massive corporate and/or governmental structures in check – all of these are the building blocks of the world that The Final Reality‘s two geniuses inhabit and fight to control. On the one hand, you have Julius Windsor – the would-be good guy if everyone only just listened to him and his brilliance. On the other hand, you have Alexander Pella – the three-steps-ahead foil to Windsor’s every move. If you have read the first two novels in the series, then you know who these two men really are (genetically, that is) and knowing that bit of information makes every interaction between these two that much more exhilarating.

What Martino does better than anyone else in this genre is integrate actual legend and folklore along with biblical narrative in a post-contemporary vision of the future. In The Final Reality, you can expect to read a high action thriller that includes Bible-based references on the location of the Creation story’s Garden of Eden in the same scene that you will read about fantastical flying airships from millennia ago – that’s right… millennia! And that was one of the fun parts of reading this book – being brought (again) into this world that Martino creates that has layers upon layers of fascinating stories yet to be told.

Even though The Final Reality is the final novel in the Alex Pella series, the world that is created through the end of this story is one that is ripe for new legends to be built on, new heroes to emerge, and new tales to tell. I would not be surprised to see Martino return to this world in the future to tell the story of the new/old continent Mu or to talk about the devastation wrought by the shifting tectonic plates (another utterly fascinating element of the story, for those of you keeping track). This is one of the most brilliant aspects of Martino’s writing; namely, that he writes a story wherein millions of people around the world are lost in major global catastrophes related to shifting tectonic plates and yet he is able to keep the focus of the story on Windsor and Pella and their epic struggle for dominance in this new world. Taking massive, global struggles for power and embodying them in a battle between two individuals makes for a great story.

Here’s an official trailer for the novel:

Once again, Martino brings his gripping style of storytelling to a world that includes romance, humor, intelligent banter, and glimpses of the science fiction-fueled future earth that may yet come to pass. If you are heading in to some vacation time and you want a fun, page-turning thrill ride to keep you busy (and maybe give you some insight into what the world may become), then The Final Reality is the book for you.