Quite possibly the best thing about Stephen Martino‘s debut novel, The New Reality, is the fact that the action is fast-paced from the very beginning! There’s nothing worse than picking up a new book, getting excited to get into the story that you read about on the back cover, and then having to trudge through 100 pages of back story just to get things going. Martino avoids that entire concern by just getting right to the point and that, alone, made this one of the best thrillers that I’ve read in years. The fast-paced action aside, I also enjoyed the story that Martino tells – even if it may be a harbinger of things to come. 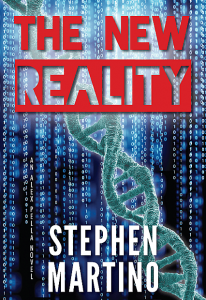 The New Reality is a medical thriller set not too far in the future (the year is 2080, though the story jumps to 2081 soon after it starts) with very real connections to today’s political world. As the story moves along, the reader is introduced to different characters situated on a global landscape ranging from America to the Arab states and more. For example, the main antagonist – Ari Lesmana, known as “the Malik” – seems to be born from the hype that surrounded President Barack Obama’s first presidential campaign. The main protagonist is a scientist and medical entrepreneur named Alex Pella who is cast in the same mold as a Steve Jobs, Elon Musk, or Jeff Bezos. During the story, Martino ties Lesmana to a citizenry with a near-brainwashed level of euphoric fanaticism. From my perspective, that connection closely followed the bizarre euphoria that followed Obama’s supporters after 2008. I never understood that – he’s just a politician, not the Second Coming. Calm down, people. Anyway…

Martino does an excellent job of bringing the reader into the panic that surrounds The Disease and, particularly, the desperation that Pella and his team feel as they try to find a cure before it’s too late. Unlike many recent releases in the thriller genre, The New Reality brings the reader a fast-paced, action-packed adventure that moves as fast as you can flip a page. There are no long, drawn out segments of the book to bore you to tears. Instead, Martino writes in a style closely resembling that of Dan Brown and Harlan Coben. And that is the style that this story needs to be told in because of the amount of movement that the characters experience during the story. One chapter takes place in America while the next chapter takes place in a high-tech, super-fast airplane while the following chapter might be in Israel or somewhere in the Arabian Peninsula. If you like reading a strong “thrill of the chase” novel that actually has a significant story to tell, then this is the one for you. And watch out for the storyline extension at the end of the novel – it’ll leave you hungry for the next book in the Alex Pella series!

The New Reality is the perfect book to read while you’re laying on the beach this summer, too. As I’ve noted, the story moves quickly and Martino moves the core discussion along in each chapter. You won’t be left waiting for dozens or hundreds of pages to find out why a certain character said something in a prior chapter – the answers are given to you as fast as you can read them and put the pieces together. Martino’s experience as a neurologist certainly plays into his ability to write a strong medical-based thriller. If you’re a fan of this genre, looking for a great book to read this summer, and/or just looking for a book that has characters with depth, a story with resonance, and a real lesson to teach today’s political leaders, then The New Reality is for you. Plus, based on the high level of quality in his first novel, I think we’ll be seeing more of Martino in the literary world. Give the Alex Pella story a shot – I really think that you will enjoy it. I definitely did!