You are here: Home / College & Fraternity Life / Student Loan Balance Just About Sliced in Half – We’re Into Four Digits Now

Only a few days ago I posted an update about my deliberation on whether or not I should eliminate my student loan debt once and for all or play it safe and hold on to a portion of my accumulated home down payment money. Most of the people I asked suggested that I immediately eliminate the student loans and finally be done with them. And I admit, that is the path I was heading in and the decision that I already made prior to posting the update linked above. However, I decided against making a full payoff and instead pretty much split the difference. I kept about half of that portion of the down payment (remember, I have much more saved for my eventual down payment on a home than the $17 thousand that I’m hemming and hawing over) and I used the other half to pay down my student loans.

This leads me to have about $9 thousand left outstanding in my student loan debt. I’ve written this several times on this blog, but when you consider that my repayment started only about 7 years ago and my initial loan amount was approximately $121 thousand, the fact that I’ve reduced the total amount of my student loans to $9 thousand is absolutely incredible. Yes, I’m going to blow my own horn on this accomplishment – it’s amazing and I didn’t do it with any handouts, large gifts from wealthy family members, or gimmicky consolidation or loan reduction programs. I worked hard, used my free time to earn more money, and lived a conservative and relatively frugal life (and I continue to do all three of these things today). And wouldn’t you know it, but this type of hard work actually paid off?

I want to take a little bit of space during this happy post to write something similar to what I wrote a few months ago when I hit $17 thousand in student loan debt. If you remember that entry, I wrote about what was going on in my life when I had accumulated my first $17 thousand in student loan debt. Well, I’d like to do that again, but this time I’d like to recall what was going on in my life as I built up my first $9 thousand in debt.

In order to do this correctly, we have to take a short trip back in time. All the way back to the year… 2000!

Unlike the post a few months ago, I was not yet a Sophomore in college when I accumulated my first $9 thousand in student loan debt. Instead, I was a second semester college Freshman. This was Spring 2000 and the major event in my life back then was joining my fraternity. The pledge process lasted 6 weeks (7 if you count spring break) and was pretty entertaining. While I won’t go into the details of what my pledge brothers and I did to join the fraternity, it’s nothing that I wouldn’t do again (and probably keel over in laughter at in the process).

I was also doing pretty well in school during the Spring 2000 semester. In fact, during Spring 2000 I was just coming off of a pretty powerful first semester of college in Fall 1999. During that first semester, I scored a 3.8 GPA and was on the Dean’s List. I racked up straight As or A- grades in all of my courses except for Western Civilization where I took home a B+. Truth be told, the instructor of the Western Civilization class did not put together a very good syllabus and was pretty confused with the honors cohort of students that I was in. I remember that very clearly. He wanted to teach what he typically taught, but because my class was an honors section of the course and because our honors section was part of this honors cohort, the poor guy was just confused and didn’t do a good job explaining the otherwise fascinating history of Western Civilization.

I scored a 3.3 GPA in Spring 2000 with mostly As and Bs in my classes. My lowest grades that semester we straight Bs in Elementary Italian and Discovery in Natural Science. I was (and am) totally fine with those grades. I tried to learn Italian as a language, but I found that it really only reinforced my existing knowledge of Spanish. And that’s not an entirely bad outcome in the long run since I have a pretty good working usage of the Spanish language. Also, I didn’t actually go to the Discovery in Natural Science classes. I had an agreement in this class (and in my Fall 1999 College Algebra class) that I would just show up for tests because I earned As in my high school classes that were more advanced than these courses – both of which were general education requirements at Monmouth University. During Fall 1999, I scored an A in College Algebra (obviously, I scored an A in Advanced Calculus in high school) and during Spring 2000, I scored a B in Discovery in Natural Science (which was fine with me considering there were only two tests and those were the only two times I went to class).

I know these grades because I can still access my student profile online. So no, I didn’t memorize them!

Spring 2000 was a busy semester for me between pledging, working for the school’s information technology department, and school. I wouldn’t go back and change anything, but I would probably have spent less time concerned with academics than I used to back then. You always hear people say that if they knew then what they know now, they would have changed this or that in their lives. Well, if I knew then what I know now – that hyper-focusing on general education classes doesn’t really do much to increase your job preparedness or overall learning – then I wouldn’t have spent so much time studying that semester.

Although, it wasn’t all just studying. Joining the fraternity came with its benefits. Back then (and somewhat still today), the campus was absolutely dead when it came to fun student social activities. Sure, there were university-sponsored events, but those events were inundated with university minders and were generally cheesy. After I was initiated into the fraternity, the social aspects of college picked up considerably. Along with the social part of college kicking it up, I was given more opportunities to express my leadership abilities. And I continue to do that to this day, though I’ve personally decided to pull back on playing the leader of the pack in the national fraternity and instead have opted to focus on developing the leadership and professional potential in our undergraduates.

But back in Spring 2000, life was good. I don’t have many complaints or aggravations about that time in my life. Here’s a picture of me hanging out with one of my lady friends (she’s the awkward smiley face – it’s my blog, not hers, so I don’t know if she wants to be put out there in public). 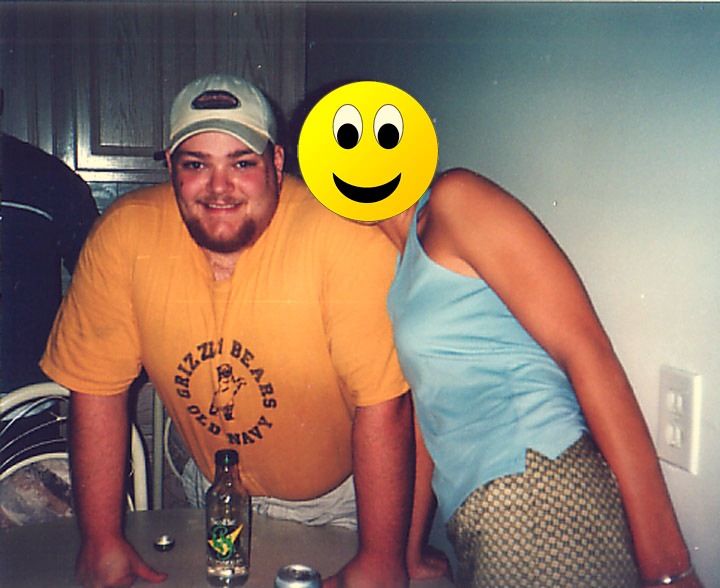 Those of you who know me aren’t surprised at seeing the SoBe bottle… or at the fact that the liquid in that Power SoBe (fruit punch) is clear!

In May 2006, I graduated from Rutgers University with a Masters Degree and $120,720 in student loan debt. Since I started repaying my student loans in July 2006, I’ve repaid a total of $112 thousand in principal to various lenders including the federal Perkins loan program, the New Jersey Higher Education Student Assistance Authority, and CitiBank. I currently owe $9 thousand in principal to the United States Department of Education’s federal Direct Loans program. This loan is serviced by the Missouri Higher Education Loan Authority. To date, I’ve repaid over $35 thousand in interest to these lenders. Follow my student loan repayment story on JerseySmarts.com.