Sometimes you have to face the music. For example, at some point over the last ten years I lost just about all of my video game skills. Gone. Sure, I can play a game here and there, but I can’t dominate them like I did when I was a little kid. I’m just not very good at the high end video games that are produced and released these days. The truth is that I suck at these Call of Duty games, I’m horrible at that Resident Evil stuff, and when it comes to Madden and other sports games – I just can’t keep up!

I suspect that there are many people out there just like me – people who used to be good at playing videos games, but try to play today’s video games and generally find themselves on the short end of the stick. If you’re one of those folks who has been passed by in the current generation of video games, then I’m here to tell you that there is hope thanks to the Nintendo Wii! More specifically, there is hope thanks to Nintendo’s Virtual Console – where you can download hundreds of old games from previous gaming systems.

Last weekend, I was flipping around the Virtual Console looking for a nostalgic way to spend a few bucks and there it was – Final Fantasy’s Mystic Quest. Frankly, I couldn’t believe my eyes when I saw it on the screen because I didn’t think that Mystic Quest was the type of big-time game that you’d find on the Virtual Console. But there it was and a few bucks and a few minutes later it was downloaded to my Wii and I was ready to play.

Mystic Quest was originally released in 1992 and you’ll be able to figure as much as soon as you turn the game on. The graphics, gameplay, character movement, audio, and sound effects are all straight out of time warp when George H. W. Bush was still President and I was kicking butt playing on the recreation soccer team in Mount Arlington. Good times, but I digress.

It took me about 10 hours of playing the game in order to beat it. Now, I don’t specifically remember how much time I spent playing this particular video game back in 1992, but I have to imagine that it was a number greater than 10! So, while I tend to fail miserably at today’s video games, I think I’ve actually gotten better at yesterday’s video games. Ha! That’s improvement right there, people! And, honestly, I could have beaten the game a little bit quicker, but it took my some time to get my bearings about me (hey, it’s been almost 20 years since I last played the game – give me a break!).

Mystic Quest follows a tried and true formula for Final Fantasy games: something bad is happening in the world, a fabled hero appears, the hero defeats a series of lesser “bad guys” which lead up to fighting the major bad guy, and the world is saved. Hey, if the formula ain’t broke – don’t fix it, right? After you save a bunch of crystals, you’re faced with going through a tower and refighting a different form of each of the lesser bad guys before you come before the Dark King (creative name, right?). After you defeat a few incarnations of the Dark King, Square-Enix (actually, Squaresoft made the game, but since they’re now Square-Enix, I’m using that name) puts together a montage with the hero visiting all of the major locations in this very small land that the game takes place in. The hero gets an update from everyone, borrows a ship from his girlfriend’s father, and goes off sailing around the world with a treasure hunter named Tristam.

And that’s it – the game is over. There’s nothing else going on after you beat the game unlike some of the newer Square-Enix games where you can go through the game from the beginning with a powered up version of the hero. But hey – this game was made in 1992 and the idea of going back through the game at top performance was probably crazy talk back then!

However, better than actually beating a game again, I was able to take 10 hours of my time (broken into an hour here, two hours there) and feel like I was good at a real video game again. So if you’re on Nintendo’s Virtual Console, like role playing games, and are a fan of Final Fantasy and Square-Enix – go ahead and download Mystic Quest. You’ll love it!

Up next from the Virtual Console… Secret of Mana released by Square-Enix in 1993. Awesome! 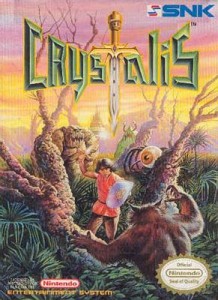