In August 2018, I traveled to Indianapolis, Indiana to attend the North-American Interfraternity Conference‘s (NIC) Annual Meeting of Members. The meeting looks and feels like any other professional trade conference complete with a wide variety of vendors and service providers who travel to the event to talk about how they can help your organization succeed. I was very impressed with the wide variety of vendors who were at the conference and I was happy to see some familiar organizations among the vendor tables. 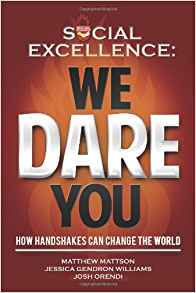 For example, I stopped at the Phired Up table and had a chance to say hello to some of the newer team members that I have not had the opportunity to meet before. Phired Up played a critical role in the development of several of the Sigma Pi Fraternity chapters in the New Jersey Province that I worked with when I served as Province Archon some 10+ years ago. In fact, based on our wide agreement with the principles in their book, Good Guys, our volunteer team in New Jersey actually hired Phired Up to conduct a regional recruitment workshop for our undergraduate chapters back in Fall 2007 and it was very well-received.

At the NIC’s Annual Meeting of Members, I told the young men at the Phired Up table how much Good Guys improved my chapters and they gave me a copy of their Social Excellence book to review. I finished reading Social Excellence quickly – in a matter of days. My big takeaway from this book is that you have to give life a chance! Go out there and take the risk of saying hello to someone, reach out and shake someone’s hand, live a life that is above the norm. The team at Phired Up talks about the four pillars of social excellence in their book. Those four pillars are curiosity, generosity, authenticity, and vulnerability. I want to talk a little bit more about generosity and authenticity in this post, but there is so much that could be said about curiosity and vulnerability. You might consider getting a copy of the book if you want to read more of Phired Up’s take on those two pillars.

On generosity, they write about the power of saying thank you and the power of making a person’s day by giving them something. It is about making someone else’s experience better through your own actions. In my own work with my fraternity, I have tried my best to give back of my time and professional expertise. I have also been a financial supporter of my local chapter, my province, and my international educational foundation. When I mix what I read in Social Excellence with what I know of my own experience as a volunteer and a donor both in my fraternity and with the many other nonprofits that I work with in my state, I find some interesting intersections. For example, it strikes me that the people who are the loudest detractors – those who want to be opinion leaders, but do not have a well-informed opinion – are those who have typically given the least of their time, expertise, and finances to the cause. This is an interesting revelation because it speaks volumes about generosity as a leading indicator on whether or not you are dealing with a well-intentioned individual or someone who just wants the spotlight for the sake of having the light shine on them.

On authenticity and focusing solely on my work for my fraternity, not my work in the larger nonprofit sector, it is critically important to know the true intent of your people before you place any trust in them. Being truly authentic is difficult for some individuals in the fraternity world because they do not have an example on which to model their actions. For example, if you are an undergraduate and your only interactions with alumni advisors have been painfully forcing a smile and a head nod as these volunteers tell stories about their glory days, then your example of being a good alumni volunteer is skewed. Those volunteers are not working authentically to improve your undergraduate experience – their involvement is more about their own experience and reliving what they loved about their time as an undergraduate. Not good.

Authentic alumni volunteers are those who the needs of the undergraduates (or whomever they are helping) before their own need. When I train new alumni volunteers, I give them this advice: if you respond to an undergraduate’s question by saying, “Well, when I was an undergraduate…” then you have immediately lost their attention. When today’s students as you about today’s problems, they want today’s answers. It takes someone who is authentically committed to improving today’s undergraduate experience to build a bridge between yesterday’s experience and the future. This is not easy to do.

This past weekend I was fortunate enough to spend Thursday – Sunday in St. Louis at Sigma Pi Fraternity, International’s 2007 Mid-Year Leadership Conference. The Mid-Year Conference is a free event where the Executive Office and National Governing Board of Sigma Pi get to train the new undergraduate Presidents and Treasurers.

This year they had Recruitment Chairmen come along to listen to a completely outstanding presentation by Phired Up’s Josh Orendi. For those of you that do not know, Josh is co-author of the best book on recruitment that I’ve ever read: Good Guys – The Eight Steps to Limitless Possibility for Fraternity Recruitment. His presentation was both timely and on-target for today’s undergraduates.

For any fraternity or sorority folks out there – I cannot recommend Josh highly enough to come and speak to your chapter or your campus. Great presentation.

This was also my first chance to do a little touring of the St. Louis area even though it’s my fourth trip out there. I got to ride up to the top of the famous St. Louis Gateway Arch as well as go on a tour of Budweiser’s World Headquarters. I should have pictures of both up in my Google/Picasa photo album soon.

Anyway, these events are great for volunteers like me because it recharges our “fraternal batteries” and gets us back on track to help better advise our undergraduates. I had a great time out in St. Louis with my undergraduates and my fellow alumni volunteers and I can’t wait for Sigma Pi University to take place in Nashville, Tennessee this July!

The guys over at Phired Up Productions, LLC recently wrote a book on fraternity recruitment. The book, entitled “Good Guys: The Eight Steps to Limitless Possibility for Fraternity Recruitment,” is a step-by-step approach to getting better men into your fraternity and to utilize the skills that those men have to create a better chapter overall.

I really enjoyed reading this book as I suspect many fraternity volunteers would enjoy reading it. What really got me about the book was the universality of the message (to fraternity men, that is). Anyone who has ever taken over a chapter of a struggling fraternity knows that it is one of the hardest things in the world to change that chapter into something worthwhile. Not only do you have the innate problem of running a fraternity chapter which is most likely stacked with hormone-enraged young men, but you have the old 1970’s stereotypes that you have to overcome, too.

But rest assured, it CAN be done! The secret to reforming a failing chapter of any fraternity is shared by the Phired Up team in “Good Guys” and was the same method that we used at the Delta Beta Chapter of Sigma Pi Fraternity at Monmouth University – look at your ritual, read it, understand it, and follow it. For fraternity men, the “ritual” is what makes you unique. There are things said and ideas brought up in Sigma Pi’s ritual that are wholly unique to our organization, just as there are likely to be the same secrets and mysteries in your own organizations. If you’re a fraternity man, ask yourself this question:

If you are NOT following what it is that makes you unique, then what exactly is the difference between joining your organization or another one? The letters on the shirt? Guys – shirts are just made of fabric. What? Are you going to talk about how “tight your brotherhood” is? Well look at that for a minute. If you do the same thing that a bunch of guys who live off-campus and are NOT in a fraternity would do for each other, then what’s the difference other than that you’re wearing the same fabric on your chest?

There IS something that makes fraternity men different and it’s got nothing to do with Bluto Blutarsky and his drunken rampages. Fraternity men stand for something. What do you stand for? Do you even know? Is it time that you picked up your ritual book and really, actually read through it?

This is just one area in which “Good Guys” excels as a “How to Guide” for operating a fraternity. Which brings me to my next point – though this book is being marketed as a guide to recruitment it really is a guide to overhauling your chapter and making it something worthy of being proud of. I e-mailed the guys from Phired Up and told them that they’re really selling themselves short by saying it’s simply a recruitment book – and they understood my point. However, I also understand their point that recruitment is the lifeblood of a fraternity.

Often, as alumni volunteers or even men working for fraternities, we tell our undergraduates that they are running a small business. And that’s true, except that there are no long-term employees in this particular business other than the volunteer advisors and the Executive Office staff. This is a hard concept for undergraduates to grasp because they are joining a lifelong brotherhood, and that is also true. What the “catch” is here, though, is that you won’t have a chapter to go back to during Homecoming or other alumni-themed events if you choose to be shitty with your recruitment. “Good Guys” teaches you how to have solid recruitment throughout the entire year and how to constantly bring in men that are worth your organization’s time and effort.

Sure, some bone-headed fraternity guys would read this and say, “Whatever, man. I’ve got a bunch of guys who like to party and I’m sticking with what works for us.” Well hey, that’s good for you. And please, party your asses off now, because the chances of you having a chapter that you’d want to bring your family back to one day or have your son join are slim to none. But hey, kegger this weekend, right?

That’s the other thing that “Good Guys” touches on and something that I’ve begun to talk about with my undergraduates – being a top-ranked, highly efficient chapter and having ridiculous parties that you’ll always remember are NOT mutually exclusive! No one EVER said it’s one or the other. In fact, I think there is a solid argument to say that if you have a highly efficient chapter, your parties will be better overall. Think about it – doesn’t it make sense?

My recommendation for “Good Guys” is as high as it could be. It’s a quick, good read that many of you could probably get through in a night. And what’s also great about it is that you can purchase an e-copy of the book for about $12 instead of a hard copy. If any fraternity men would like to talk some more about the pros and cons of this book, please contact me. It’s definitely worth the money!