Hi everyone! I know I haven’t posted a new entry on the blog in the last few days, but there’s a reason for the delay. About a week ago I uncovered something online that deals directly with me in a way that is very humorous (at least I ultimately found the entire situation humorous when it really isn’t that funny, but more or less pathetic). I’ve been crafting an extended entry for your reading pleasure which attempts to explain what it is that I found online. However, I keep running into an issue where I find that once I explain one element of the story, another element then needs additional explanation.

The end result is an entry that, at this point, is almost 3,000 words. For comparison’s sake, that would be like reading about 15 entries the length of the one that you are reading now. As you might imagine, this is becoming a monster of an entry which I think most of you may just skip through. However, for those of you who take the time to read the entry you’ll find out a little bit more about me, my hometown, my elementary school, some of my former friendships, etc.

Look for that entry coming at some point this weekend. 😉

After the wonderful snowfall that we experienced over the last week, I thought that no time would be better to upload another poem from Mr. Joseph P. Martino of Millburn, New Jersey! Mr. Martino is JerseySmarts.com’s poet of choice – especially during the holiday season. So, without any further adieu, JerseySmarts.com is glad to bring you It’s Christmas Time in New Jersey, by Joseph P. Martino.

“It’s Christmas time in New jersey, come see and hear,
all the sights, sounds and the glow and sparkle of lights so pretty,
that comprise the heartbeat, rhythm and sparkle of our great,
big wonderful welcoming state and cities.

It’s Christmas time in New Jersey our cities, towns and villages,
are now all adorned in their most glorious dress,
as church elders prepare the baby Jesus creche.

Christmas trees on town halls, stores, homes, lawns and malls are all shining bright.
Gaily decorated in colored bells, tinsel, garlands, angels and lights, that glow and sparkle day and night,
boy oh boy what a magnificent and inspirational sight.

As Santa Clause makes out his Christmas list, making sure no girl or boys requested
toy will be forgot or missed. as Santa Claus extends his warm and welcoming Christmas greeting to everyone throughout our great state.

” Merry,Merry Christmas and a happy New Year to one and all.”
For, it’s Christmas time in New jersey.”

You may have noticed that the blog hasn’t had a frequent, daily update for some time. Instead, I’ve been updating every other day and sometimes a few days in a row (like the last few days). As you’ll recall from an entry I uploaded in November, for the first year of Joe’s Journal and JerseySmarts.com being combined I was keeping to a one-post-each-day format to prove to myself that I can handle the increased pressure of having a single blog that continues to increase in popularity. I think I’ve accomplished that objective! Besides, I’m finding that as I put more time in some of these entries, they are garnering better search engine rankings and thus the website is getting more hits – which is always nice.

There have been a few other things that I’ve done in the last few weeks that really begin to dig into the minutiae of operating a website so I won’t bore you with them. Just know that on those days when there is not a new entry for you to read, chances are I am working on something else behind the scenes that is, in the long run, just as important as new content! 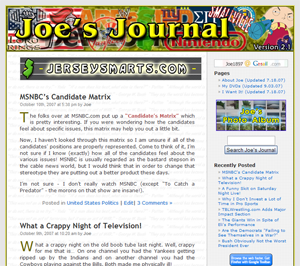 There are a lot of reasons why I choose to write this blog. I write it to keep people in my life updated on what I’m thinking and what’s going on in my life, I write it to express an opinion, I write it to spread that information which I feel is relevant to the interests of my readers, etc. However, one of my main motivations for writing this blog is to help counter what I believe is a severe lack of true journalistic reporting that independently verifies its sources and removes slanted opinions from the final product.

In no way do I suggest that JerseySmarts.com is engaging in such reporting. In fact, I would agree that I provide my personal point of view in all, if not most, of the entries on this blog. In providing that point of view, though, I do try to counter any biases that I find in the topic, should such a counter be relevant.

Anyway, the purpose of this entry is to announce a Citizen Journalism Conference at Monmouth University one week from today, November 18, 2009. Complete details are below.

The Citizens’ Campaign and Monmouth University are co-hosting a conference on November 18 to discuss the current state of local reporting in our new media environment, including how hyperlocal websites provide a means for stepped up local coverage and opportunities for citizen journalists to report from the frontlines.

The “Citizen Journalism: Countering the Culture of Corruption” morning panel will discuss the cuts in local news room staff and its impact on the quality of local government coverage, and how new online tools make it possible for journalists and citizen activists to report what is happening in city hall and throughout the community.

Speaking on the first panel will be Michael Delli Carpini, Dean of the Annenberg School of Communication at the University of Pennsylvania; Richard Benfield, former editorial writer of the Bergen Record and New York Times; Ted Mann, Founder of InJersey.com and Digital Development Director for Gannett New Jersey; and Michael Shapiro, CEO and Editor of www.TheAlternativePress.com.

The day will also feature a “Citizen Journalism” certification course for beginning bloggers & citizen activists who want to submit their own local news stories to online publications; and an afternoon “Meet & Greet” panel for journalism students and activists to talk and network with online news site editors.

The Conference will be held at Wilson Hall at Monmouth University from 11 a.m. to 2 p.m. Light refreshments will be served. This event is free and open to the public. Seating is limited, so please reserve your seat today by emailing heather@jointhecampaign.com.

11:30 am: Opening Remarks by Harry Pozycki & Round Table Discussion:
The New Media Climate: How the internet is transforming modern day journalism and its impact on local government & politics

Registration
This event is free and open to the public. To register, email Heather@JoinTheCampaign.com

This should be a great event and I hope that my fellow bloggers in the New Jersey area will plan to attend the conference. I’m hoping to get over there myself, schedule permitting. If you DO attend the conference, please consider sending a report on what was talked about and some of your thoughts.