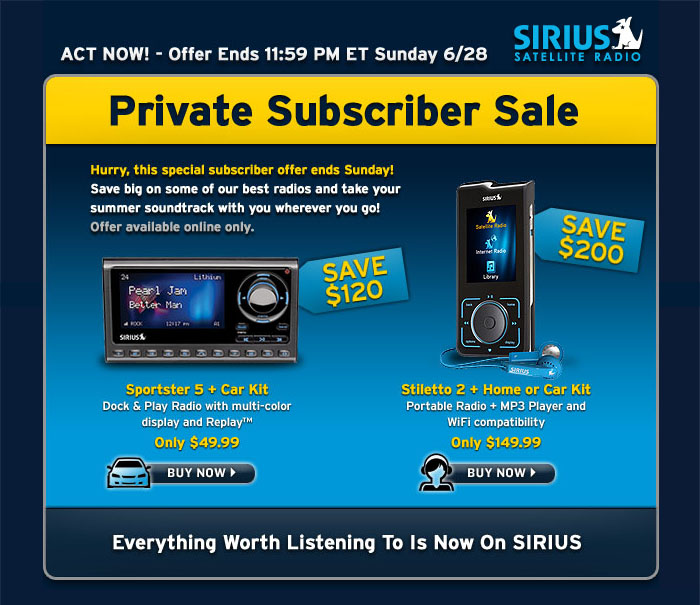 satellite radio. I’m also an affiliate for the company as you can tell from my links all over these posts trying to get you to buy something! But I think I cover the satellite radio company honestly and from the perspective of a consumer, shareholder, and marketer of the company.

Yet, whenever I check what the online financial media is saying about Sirius XM

, I always find that the loudest negative voices are spewing from the Motley Fool website. I have no problem with an analyst saying that a stock is not worth buying (at this point, unless you’re a long-term investor I wouldn’t suggest buying Sirius XM

either), but the group at Motley Fool is viciously against this radio company and I can’t figure out why? Maybe a bunch of their writers got burned on the stock – who knows?

is the worst stock of 2009. Bear in mind that 2009 isn’t even a month old yet! What bothers me, though, is the complete one-sided opinions that they put out there and the implied stance that their ideas are obviously applicable to the rest of the country. An example:

Satellite-radio competes for my ears with my Apple iPod and its dedicated car jack, my custom-burned CDs, and with a host of new mobile applications, including Ford and Microsoft’s Sync. And with other automakers experimenting with putting routers in their cars that could stream free Internet radio, Sirius’ competition for luxury dollars is increasing.

And satellite radio is very much a luxury. A past subscriber myself, I found my use waning in the months following a cross-country trip. As use fell, I found defending the monthly cost difficult — and that was before the economy cratered, when luxury spending was easier to justify.

First, just because your ears have multiple listening options, that doesn’t apply to everyone. I’m glad that you can afford a car with a dedicated jack for your iPod. I – and a great deal of Americans who are struggling in the current economy – cannot afford this luxury. Second, I’m glad that your new, expensive car has either a router or Ford/Microsoft’s Sync program. The 2000 Civic that my Mom just gave me doesn’t have those options. Neither did the 1999 Chevy Blazer that I donate to charity at the beginning of the month. Maybe the next used car that I buy will have a fancy feature or two, but again – the vast majority of Americans can’t afford these cars with all of these bells and whistles that you apparently can afford.

. That was his dumb choice. For me – someone who drives more than two hours per day – I enjoy the variety that I get from Sirius XM

. Sure, sometimes the lack of original content on Howard Stern pisses me off and yes, even with dozens and dozens of commercial-free music channels there is sometimes nothing to listen to, but that’s no different than cable television with hundreds of channels with nothing to watch!

For me, Sirius XM

is the perfect companion during my daily commute and drives around the state. It’s also nice to turn it on in the office and be able to listen to commercial-free music. For some people, Sirius XM isn’t right.

However, as a shareholder I have a serious problem with Motley Fool publishing around 10 negative articles on Sirius XM

this month alone. That’s ridiculous and an obvious show of bias. I wouldn’t care what Motley Fool does with their webspace, except that Google Finance uses their updates in their news feed so every few days I get another death story from these bias folks. If the rest of Sirius XM

‘s investors are getting the same reports, then what does anyone expect besides a huge sell off?

If this company dies, it will be in no small part thanks to the one-sided, arrogant comments by online groups like Motley Fool.