This past weekend, the Monmouth University Hawks finally played a game at the MAC with their 2011 – 2012 home opener. After going 1 and 8 on the road, the Hawks landed in West Long Branch to take on the Fordham University Rams in a non-conference game. As the title of this entry suggests – the Hawks won the game by a final score of 80 to 65. And while I don’t really have any pictures from the game other than the one below, I thought I might offer some comments on the general atmosphere at the MAC on Saturday night. 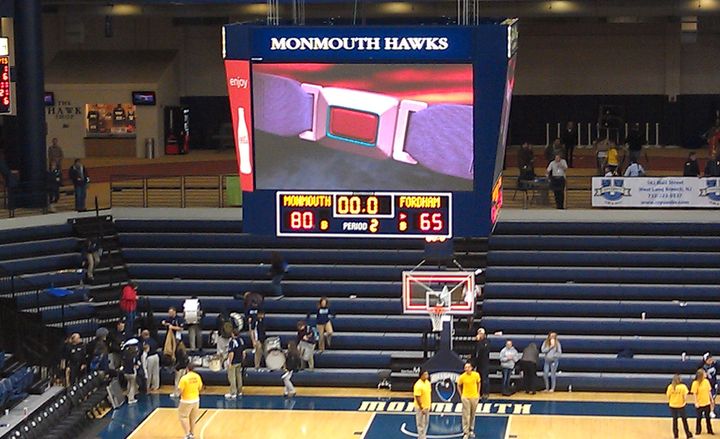 The Monmouth Hawks won their home opener over the weekend

The first thing that I noticed was that the people who actually attended the game were excited and into the action. According to various reports there were slightly over 1,800 people in attendance (which means the arena was slightly less than half full) and I’m sure that the young men who were playing for Monmouth enjoyed actually hearing the fans cheer for them when they scored. Remember, by some brilliant stroke of scheduling genius (sarcasm) the Hawks played NINE away games to start their season. Imagine playing 9 away games where there are just a handful of your fans in the stands if any at all. Not smart… And on that topic, Monmouth will only play 2 home games before January 1st this season. Last season, they played 6 home games plus an exhibition game before the new year. The year before they played 5 home games before the new year. Something about scheduling just 2 home games before the new year doesn’t sit right with me as a season ticket holder; not to mention that there are only 12 scheduled home games last year as compared with 15 last year (16 with the exhibition) and 14 the year before. But aside from the head-scratching scheduling, as a season ticket holder and team supporter I’m more concerned with the kids on the team. Up until Saturday night, these kids player this season with nearly no fan support. I’m sure that they enjoyed the standing ovations, chants, and cheers that the fans gave them throughout the game on Saturday night.

And those guys deserved every little bit of the support, too.

The team was led by Jesse Steele’s outstanding performance (which earned him NEC Player of the Week honors) where he scored “18 points while contributing six assists, five boards and a steal.” That quote was from the linked article, which I suggest you read when you get a chance.

Two more comments about Saturday night’s game and then we’ll call it a day for this entry. First, I was very encouraged by the new Head Coach King Rice and his style of motivating his players. Whereas the previous head coach opted to hoot, holler, and yell at nearly every player during what seemed like every second of the game, Coach Rice was cooler, calmer, and more collected than his predecessor. And this may sound like an odd comment to make after only watching one game under the new coach, but it appeared like the players were more confident in their game plan. In other words, it seemed like the dramatic decrease in the constant yelling and screaming coming from the bench made the players more confident in doing what they do best – play basketball.

After the last two seasons of Hawks basketball it was nice to see confident Hawks players for a change.

Second and finally, I have two comments about The Varsity Club. I missed Coach Rice’s post-game speech in The Varsity Club because the two dopes that I went to the game with didn’t want to hang around too late after the game was over. We had a small housewarming party to get to after the game and these two guys acted as though their entire lives depended on running out the MAC and getting to that party. Granted, we did wait around for a little while upstairs to hear Coach Rice talk, but the coach must have been held up doing something downstairs. So, about 30 minutes after the game ended we left The Varsity Club because the dopes that I went to the game with ramped their complaining up to an absurd level. That said, what I heard about Coach Rice’s speech was all positive. The word is that he was very sincere and very thankful for the fans who came out and supported the team.

The second comment about The Varsity Club was that the pregame food preparation was not that good – at all. For starters, for the second time in the last few weeks The Varsity Club was serving chicken on the bone as the main entree and a very weak side dish (pierogies). I’m a firm believer that if you’re serving a large group of diverse people, then you can’t have one (or two) main entrees that feature a meat stuck to a piece of bone. You can have baked chicken on the bone, but then you have to also serve a pasta in red sauce or a tray of sandwiches or something. You can’t just have meat on the bone (cue jokes from my roommates on that comment). But what was more disturbing was that they ran out of food about 45 minutes into the pregame meal! Sure, they brought some more food out about 15 minutes before the game started (including meat that wasn’t stuck to a bone), but I was a little surprised that they didn’t anticipate the demand for space in The Varsity Club for the first home game. All anyone had to do was talk to any of the season ticket holders and they would have realized that there was a huge demand for one of these damn home games already. Of course there were going to be a lot of people in The Varsity Club! I submitted my comments to the gentleman who runs that show up there and he was very cool about it and admitted that they just underestimated the demand for the pregame meal before the game.

Here’s looking forward to the next home game on Thursday, December 22nd!