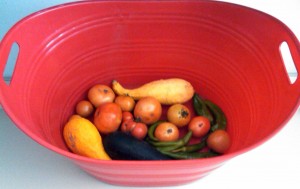 While this week’s take was better than last week’s, it’s still not the same type of abundance that we experienced during the first few weeks of this year’s season. I talked to the farmer a little bit and it seems that the fields are very dry and thus affecting the overall output of the farm. New Jersey has had a weird weather system this summer, flipping between scorching hot days, stuffy humid days, and the occasional rainy days.

Oh well. Tomorrow I’m going to post pictures of the omelet that I ate for breakfast this morning. It was a delicious combination of produce from the farm!

It’s the summertime and that means that every Saturday morning I’m heading to the local Community Supported Agriculture (CSA) farm to get some fresh produce. Well, sorta… It turns out that my local CSA farm hasn’t really produced very many good weekly “takes” in the last few weeks. In fact, take a look at my latest take from the local CSA farm: 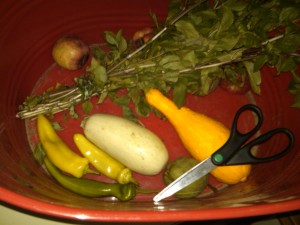 Pretty scant, huh? All that I was able to pick up in addition to what’s in the picture is some berries. I am, of course, heading back to the farm this Saturday morning so I’m hoping that there is a better take this week. In any event, I’ll post the results here.

Alright – I know that this is a bit late in being posted to the blog, but I’ve been busy! Below you can see a picture of our second take from the local CSA farm (which we actually picked up about two weeks ago). Granted, none of this food actually exists any more since we’ve either eaten it or given it away, but I wanted to share our second take with you folks anyway! 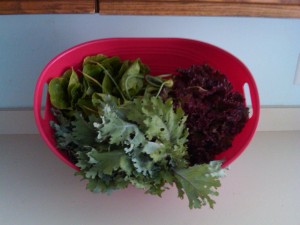 Just like the first week, you’ll see some kale and garlic scapes in there. Also, there was some red leaf lettuce as well as some collard greens and red kale (I think).

I should have taken a picture of what we picked up this past weekend – huge bulbs of organic garlic dominated the take and I’m not sure when we’ll ever actually use all of them. However, it’s better to have this stuff than not, right? Stay tuned – I’m trying to get some CSA take pictures up each week or at least every other week.

Yes, it’s that time of the year again when our local community supported agriculture (CSA) farm opens for business. This past Saturday, my roommate and one of our buddies went to the farm to get our share of this week’s crops. This week we picked up red kale, red lettuce, garlic scapes, bok choy, and collard greens. See the picture of our take below. 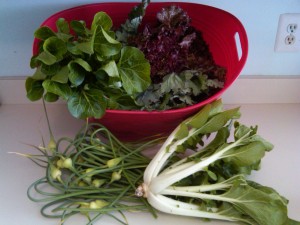 Our first take for the 2010 season

Thus far I’ve only tasted some of the garlic scapes after they were made into a very strong pesto by my roommate. I also mixed some of the pesto into some vodka sauce that I had with my garden rotini last night – it was pretty good! As the weeks go on we’ll be getting more and varied types of produce so stay tuned to see what the farm brings us this year!

Oh, I’d be remiss if I didn’t mention that my roommate and I completely gutted our refrigerator and freezer on Saturday afternoon. After the top-to-bottom cleaning that we gave that thing, there was enough room for us to place the entire bucket of produce that we got from the farm (the red bucket in the picture above) on the bottom shelf of the refrigerator. It was a perfect fit!

We had a big day at our community supported agriculture farm in Farmingdale, Monmouth County, New Jersey today. Not only did we come back with a bunch of pears (two types) and apples, but there are finally greens again. We took some escarole and some bok choy – neither of which I’ll eat – and a bunch of squash. I have to find a recipe for squash because the ones that we found look pretty good.

In the coming weeks we’re supposed to get some pumpkins, some more lettuce, some cabbage, and some more pears among other items (including the ones already listed above).

At this point, I think that we’re pretty close to having gotten our money’s worth for the entire season. We paid something like $380 or $390 for the half share for the season – we’re pretty close to having received that amount of food from the farm. Plus, it’s nice to be able to go to the farm on a Saturday morning and spend some time in the field picking out the week’s vegetables.

If you’re living somewhere in New Jersey and you’re not sure if you have a CSA farm near you, take a look at this list and see if anything is close by!