Years ago, I was a big wrestling fan. Name me a guy in their late 30s/early 40s who was not a Hulkamaniac back in the 1980s and 1990s and and I’ll show you someone who is not telling the truth. Former and current wrestling fans of any age will know the name Jim Ross. At nearly 70 years old, Ross has been in the professional wrestling industry for nearly 50 years. And during that time, he has collected a wide set of stories and experiences that he shares in his new book, Under the Black Hat: My Life in the WWE and Beyond. 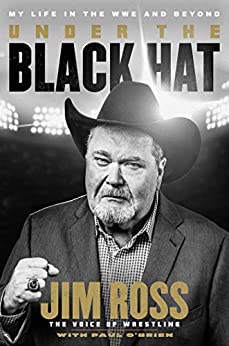 One part of this book that stuck with me was the deep humiliation and insult that Ross suffered at the whims of Vince McMahon. Time and time again, Ross recounts how he was put into on-air positions that he found humiliating and that he was uncomfortable with from the start. It actually becomes painful and frustrating to read the on-going embarrassment that he has to deal with just to be able to do his job. As someone who watched some of these acts take place on television, they never seemed to make sense to me and never really fit in with any of the other stories that were going on. They all just seemed oddly out of place and disconnected from everything else on the show.

And, well, that is exactly what you learn when reading this book. Namely, that McMahon and his writers had a penchant for making Ross feel terrible. In other words, they enjoyed watching him get degraded on television. Again, it becomes brutal to read how, over and over again, Ross was put into a position that made him feel uncomfortable and that he felt obligated to participate in to be “in” with the wrestlers and the boss. This is the stuff of a modern day harassment lawsuit.

However, the part of the book that stayed with me the most was the beautiful tributes that Ross gives to his now-passed wife. She was his rock during these turbulent times and always reassured him when he would go back to the promotion. It sounds like the relationship that most people dream of finding – a man and a woman who truly understand and appreciate one another. For that part and for the love that these two shared, it was painful to read about how her passing in the book and the reader can feel the raw emotion that Ross is dealing with due to that major loss in his life.

At some point later in the book, Ross talks about his connection with Tony Khan and his new, upstart wrestling company called All Elite Wrestling (AEW). This is the show that Ross now finds himself announcing on each week and he appears to be having fun and enjoying himself while doing it. The comments about AEW are a nice way to end an emotional roller coaster that is much more a story about his abuse by McMahon and a love letter to his late wife for supporting him than anything else. If you are or were a wrestling fan, then I think that you will enjoy reading this book.