You are here: Home / Local People & Politics / Celebrating the 20th Anniversary of the “Check Out Hunger” Campaign

Are you ready to celebrate? It’s the 20th Anniversary of the Check Out Hunger Campaign and JerseySmarts.com is joining with a band of other New Jersey bloggers to spread the word about this program. Below are some materials that I received talking about this great and worthy program. Enjoy! 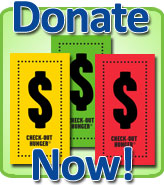 The familiar Check Out Hunger tickets

HILLSIDE, N.J. – Check-Out Hunger, an annual front-end awareness and fund raiser for the Community FoodBank of New Jersey, will be marking its 20th year milestone this fall. This campaign, which began in New Jersey, is run at supermarket chains across the northeast.

The Community FoodBank of New Jersey reports that need for nutritious food is up 30-40 percent at its partner agencies (soup kitchens, pantries, shelters, etc) this year.

In 2009 Check-Out Hunger crossed the $2 Million plateau for the first time. The campaign raised $2,093,086 for food banks across the state. Since 1992, millions of people have supported the program at food markets and online at www.checkouthungernj.org.

The Community FoodBank of New Jersey, a member of Feeding America, distributed 35 million pounds of food in the last year to people in need in 18 of New Jersey’s 21 counties. Its staff and volunteers fight hunger and poverty not only through the distribution of food and grocery products, but by education and training, and by creating new programs to meet the needs of low-income people. The Community FoodBank of New Jersey has earned Charity Navigator’s highest honor, a four-star rating.

Here’s how people can help:

So, folks, if you’re at the checkout counter and you see the different colored tickets like in the image above, consider donating a few bucks to help the Community FoodBank of New Jersey out this holiday season. Thanks.