Good morning, everyone! Today we bring you an updated and revised version of Joseph P. Martino’s Christmas poem – It’s Christmas in New York City. Some of you may recall that we posted this poem last year during December. Well, Mr. Martino has submitted a revised version and we’re glad to bring it to you today. Read on and enjoy!

It’s Christmas in New York City, come and experience
the sights, lights and sounds so pretty
That comprises the rhythm,beat and excitement of our
great big wonderful city.

It’s Christmas in New York City, now adorned in her Most glorious dress,
as church elders prepare the nativity scene and the Baby Jesus crèche.

Christmas trees displayed all over town adorned and decorated in
Gaily colored lights,bells,reefs and tinsel that glows and twinkle in anticipation of Kris Kringle

Saint Nick extends his warmest Christmas wishes to all who visit or call,
“Merry, Merry Christmas to one and all”… Here’s hoping, that on Christmas Day snow will fall.

One of the things that I truly enjoy in life is the taste of the Elk Candy Company’s marzipan. Not only is the taste rich and full of that delicious almond flavor, but the texture of the marzipan is soft yet strong. Quite honestly, their marzipan is made just right. I’ve been eating their marzipan since I was a little kid living in Manhattan and now as one of their online customers.

And with that in mind, here is an update from the folks over at the Elk Candy Company regarding their availability to help you with your marzipan needs for this holiday season:

We are busy making our marzipan.

The holidays are fast approaching, don’t forget to get your orders in. Thanksgiving is 3 weeks away!

I don’t know about you all, but I’ll be getting myself some marzipan from the Elk Candy Company in the next few weeks. Not only does their marzipan make a great gift, but it’s the type of gift that you can treat yourself to and not really feel that guilty about it. I can’t wait!

Today’s entry is from the “Entries That Never Made It” file. A brief explanation, first. If you don’t know, JerseySmarts.com is operated off of the WordPress database. This database system allows me to save drafts of entries and revisit them at a later date and time to complete my thoughts and then, ultimately, upload the entry to the blog. Well, sometimes I start an entry, go back to it a few times to add new thoughts, and then wind up not finishing it. In the past, I would have just deleted the entry and moved on. However, I thought there might be some sense (and maybe even some humor) in keeping the half-finished entries available for reading on the blog.

Which brings us to today’s post. The entry below was originally prepared back in November 2009. My impetus for writing this one was the fact that the roads in New Jersey were packed with folks from other states who had no idea how to drive Garden State style! As you might imagine, dealing with horrible drivers got me pretty irate so I began writing this entry as a way of explaining how people should drive in New Jersey.

Before you read the entry below you should understand that there are half finished sentences and thoughts that just end without being completed (like the very first sentence). Anyway, I hope you enjoy!

Stop At A Stop Sign
The picture to the left is a stop sign. When you see one of these signs on a road that you are traveling on – STOP! Stopping is bringing your car to a complete stop. This does NOT mean that you can roll through the stop sign into on-coming traffic, especially if you are at a four way stop intersection.

The Middle Finger
If you see the picture to the left while you’re driving around New Jersey, chances are that you’ve fucked up and made someone driving near you very mad. In fact, there is a strong chance that you broke one of the rules that I’m sharing with you on this page. The image to the left shows what we call the Middle Finger. When someone gives you the Middle Finger, you should refocus your attention on the road and your driving skills and, if necessary, pull into the slow lane (see below) to let the professional drivers get to their destination without being aggravated by you and your ridiculously amateurish driving style.

The Fast Lane and The Slow Lane
You’ll notice in the picture to the left that there are two lanes on this highway. In New Jersey, the lane on the left is what we call the “Fast Lane” and the lane on the right is what we call the “Slow Lane.” When you’re driving in New Jersey, you’ll often see speed limit signs telling you what the suggested speed limit is for the road that you’re on. Note my use of the word “suggested” here. It is common in New Jersey for drivers accelerate between 5 and 10 miles per hour faster than the suggested speed limit. On the highways, you’ll often find people accelerating to greater speeds (none of which is condoned by JerseySmarts.com). However, if you find yourself driving in the left lane and you’re driving either at or below the speed limit, get in the right lane immediately! You’re blocking the professional drivers from using the left lane to drive a little bit faster than the speed limit and will likely cause yourself to receive the Middle Finger (see above).

Do Not Tailgate
You see this picture to the left? That’s the rear end of a car. When you’re driving in your car and you come upon this picture to the left (or a variation of it), you slow down and keep a distance. You do NOT pull the front end of your car within inches of the rear end of the person in front of your car. That would be an asshole move and will likely cause you to receive the Middle Finger (see above).

You know it’s funny. The more I read that half finished entry, the more I think that there was a lot of potential there. Oh well, maybe one day I’ll revisit this entry and actually complete it!

This year for Christmas, my family made one of the best decisions that I think we’ve ever made as a family. While we were sitting around for my Mom’s birthday celebration in late October, we began talking about what everyone wanted for Christmas this year. I’m sure that you have a similar conversation in your family so that everyone knows which presents to buy. It’s a fairly common occurrence, I think.

While we were beginning the conversation, I said to my Mom, “You know, I don’t really want anything. You don’t have to get anything for me.” And then my older brother jumped in right away and said, “Yeah, me neither. I don’t want anything.” And after that an entire conversation ensued about not purchasing gifts for anyone this year. Our rationale was that we each had different financial goals that we were reaching towards so spending a few hundred bucks (or, very likely, much more) on Christmas gifts that no one was really looking for would be a waste of otherwise scarce financial resources.

So last Friday night, my Mom hosted our family and extended family for her annual Christmas party and it was a great time as always. Then on Saturday morning my older brother made breakfast and we enjoyed not spending a ton of money on otherwise unlooked for presents. Except for my younger brother, that is, who swore up and down that we left that conversation back in late October with the idea that we might not buy presents. Oh well – not a problem at all!

Leaving my Mom’s house with only a few items marked one of the better Christmases that I think I’ve had in a long time. 🙂

Here you go, folks. Just a few pictures of what I woke up to this morning in beautiful Tinton Falls in Monmouth County, New Jersey. Needless to say, I’m going nowhere today which works with my schedule of being on vacation this entire week. All in all, not so bad I guess. If you have somewhere to go today, you might reconsider not leaving your home – it’s horrible out there! 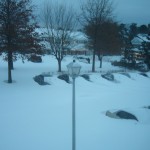 My car among the row of snowed in cars 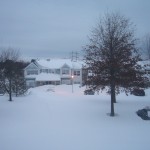 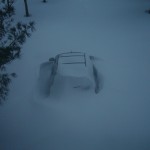 Roommate’s car from my bedroom window 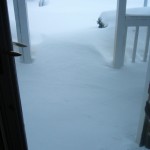 Walking out the front door is a no go 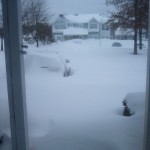 My roommate’s car nearly swallowed up 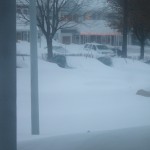 That’s my car on the far right… 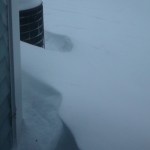 There’s a cooler somewhere underneath that snow 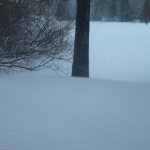 The backyard – under about two feet of snow 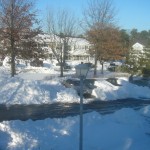 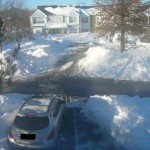