You are here: Home / Health Ideas & Gym Stories / Yesterday’s Update Annoyed Me, So I Did a Little Something About It

After I posted yesterday’s update which showed just how sedentary my lifestyle is mostly forced to be, I got a little annoyed. Well, I was actually annoyed while I wrote it and then a good friend of mine called and he and I bitched to each other about the various pains in the neck that we have to deal with every day. During our bitch session, I cited the fact that I have this ultra sedentary lifestyle and it creates a much less in shape and physically powerful “me” than should exist.

The combination of writing yesterday’s entry and bitching with my buddy pushed me to a point where I had to do something about the week’s worth of results that I posted yesterday. And I did. Here’s the graphic from FitBit showing the statistics that I achieved yesterday: 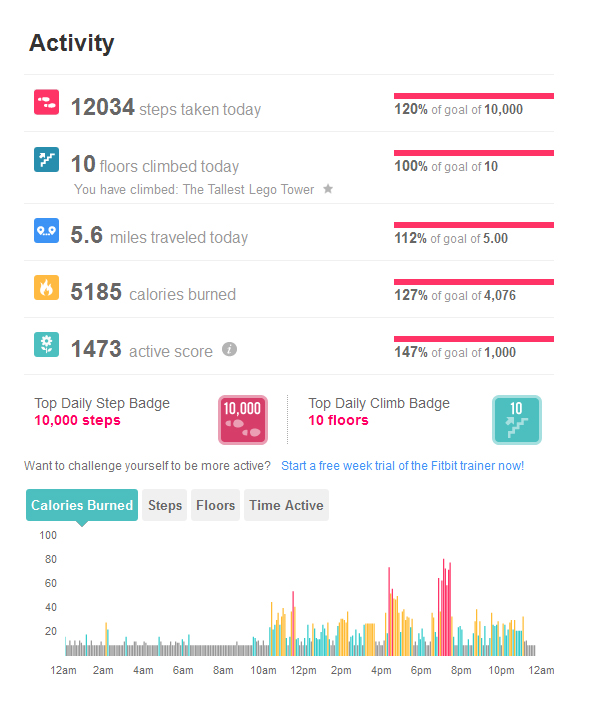 Yesterday’s results from my FitBit Ultra.

This is what happens when someone gets annoyed at being forced into the proverbial corner. And this proves that I have the physical ability to generate these types of statistics (which I don’t think was ever in question anyway).

I’d like to suggest that I’ll keep this high level of activity going throughout the week, but I’m more realistic and understand that making such claims will ultimately lead to failure. For example, looking at my schedule for Monday I already know that I’ll be spending 13.5 of my 16 waking hours that day either driving, sitting in meetings, or crunching numbers behind a desk. Could I squeeze in a walk or two around the block while I’m at the office? Of course. Could I take the stairs instead of the elevator? Well, I normally do that already. Could I reasonably get the type of statistics that you see in the image above with the planned schedule that I have to navigate on Monday?

And that’s the difference between reading weight loss and health-related stories on this blog versus reading them on other blogs. I’m realistic. If I was to buy-in to the bullshit that we sell elementary, high school, and college athletes, then I’d be panicking and going crazy right now. You know that line of bullshit that we sell those athletes. It takes different forms, but it mostly sounds like: “The only one stopping you is YOU!” or “If you WANT to do it, then you WILL do it.” or “Do or do not. There is no try.”

Alright, that last quote was from Yoda in Star Wars, but you get the picture.

Sometimes, there are legitimate reasons for you not to be able to get to the gym or walk the suggested 10,000 steps in a day. If you believe the bullshit hype (and, unfortunately, I think that most people do), then you’re going to drive yourself nuts trying to find out how you can fit in those 10,000 with almost no free time in your day and without compromising your professional efficiency.

It’s about balance, folks. It’s not about hysteria and it’s not about believing the motivational crud that we sell to people who don’t have any expansive, real world responsibilities. If you use your free time effectively – when you have it – then you might be able to get a day’s worth of work like what’s noted in the graphic above. Much more importantly, though, is realizing that you may not be able to achieve this goal on a daily basis because of other personal and professional commitments… and that’s okay.