While reading a PDF version of Sigma Pi Fraternity, International‘s Emerald magazine from October 1919 (Volume 6, Issue 3), I came across the brief article below, written by Harold K. Bowen. 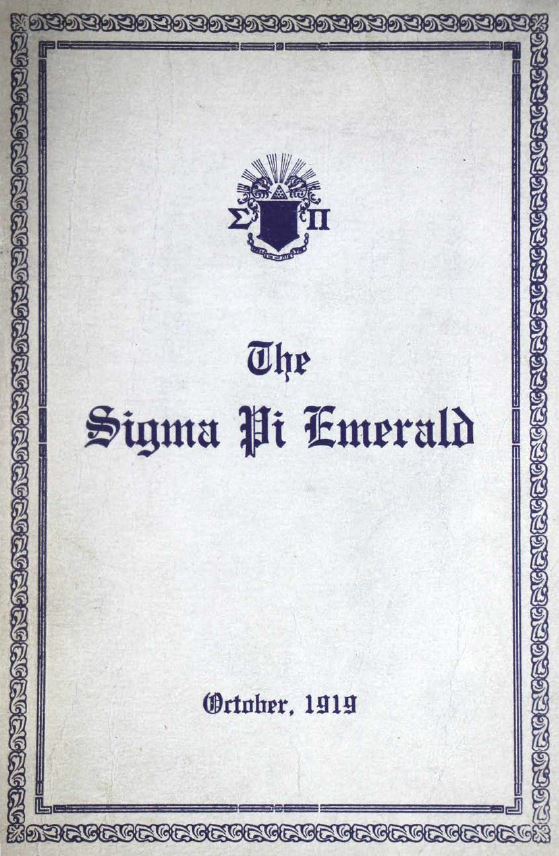 As a clarifying aside, Brother Bowen is listed as being from “Delta-Xi,” though that is not possible using the chapter designations that the Fraternity uses today since the Fraternity’s Delta-Xi Chapter was founded at Southern Utah University in 1970 and this article was published in 1919. My assumption is that Brother Bowen is from Xi Chapter at the University of Iowa (the Fraternity’s records show a Ralph Bowen initiated into Xi Chapter back in 1918) which was part of the Delta Province at the time. Today, the Fraternity uses geographic demarcations to name provinces (Heartland Province, New England Province, South Atlantic Province, etc.), but this was not always the case – in the early 1900s, Sigma Pi used Greek letters to name the provinces.

The information that Brother Bowen provides in his write-up is interesting from a historical perspective, but also deeply relevant to keep in mind during formal recruitment. Here is Brother Bowen’s advice that you should remember when considering men for membership in Sigma Pi:

Sigma Pi does not seek to claim any man who desires to enter our Fraternity that he may merely wear our badge. Such a man if received within our fold would prove undesirable owing to his peculiar make-up. A self-individual within a fraternity is out of his environment and it would require more than a badge to convince him that he was in the right environment. He could not possess that capacity of wanting things for his fellowmen and would never sacrifice his interests or desires that his brothers might be benefited thereby.

Occasionally we recognize a fraternity man by his badge, only to conclude much to the discredit of his fraternity that he lacks that requisite quality of a true fraternity man, that of being a good mixer. Though he may have acquired much in wealth or honor he would know little of men and their ways. Anyone desirous for self alone could not be recognized as an authority on men and would never be considered by the world as one of its spokesmen.

Fraternity men should be crowd men and as such feel more at home when rubbing elbows with their brother men of the crowd. It is not easy to have courage for others when they are not interested in what should be our common endeavors. However, the men who achieve in this world are those who possess the courage to want things for others. They are not for self. (Nor is success measured by self.)

Sigma Pi is for all of us when all of us cooperate to make it better and bigger. Badge men should not seek to be Sigma Pis. Sigma Pi wants crowd men.

As is so often the case with our forefathers in Sigma Pi Fraternity, Brother Bowen writes eloquently about what the Fraternity needs to thrive. He distinguishes between Badge Men and Crowd Men with the primary difference being that Badge Men join a fraternity simply to join. Or, as was common in the 1910s when this was written, some men joined a fraternity just to show off the group’s badge on their chest instead of earning the privilege of wearing that badge everyday that they were honored to be a member.

Do you know someone like that in your chapter? Someone who is more concerned about being a “frat guy” than about living a contemporary revival of the storied history behind the letters on his chest?

Today, think of the guys who come out for rush just because they want to be a “frat guy” and not necessarily because they want to join something bigger than themselves. These are the opposite of the Crowd Men that Brother Bowen notes in his essay. He says that Crowd Men are those who “have courage for others when they are not interested in what should be our common endeavors.” What does this mean? In today’s terms, Crowd Men are those who are constantly working to improve their local chapter, the larger Greek community, and the plight of collegians across the country. They take an interest in what is important for the Fraternity, but they also see the larger battles taking place across our culture and work to improve the standing of their friends, fraternity brothers, and colleagues in the greater struggle.

One of Brother Bowen’s final comments resonated with me in a particular way. He writes, “Sigma Pi is for all of us when all of us cooperate to make it better…” We need more men – young and old alike – who are committed to cooperating to truly making the Fraternity better for all of us, but more importantly – better for the next generation of Sigma Pi men who have yet to join us.

This article is cross-posted at TheEmerald.org.