You are here: Home / Entertainment / Round Three of Trading in Old, Dusty DVDs to F.Y.E. – How Much Did I Get This Time?

For some reason, I get into a “winter cleaning” mindset right around the post-Christmas time of year. It must be something about a new year coming in and an old year going out, wanting a fresh start, beginning the new year with a clean slate… or something like that. Who knows? Anyway, I took this week off from work and while I was snowed in for the past few days I had that winter cleaning bug bite me again. In fact, as I was sitting in the home office area of my bedroom I decided that it was time to start cleaning up and, frankly, cleaning out some of the stuff that was laying around. Granted, I’ve been cleaning out a lot of clutter for the past few years, but something in my mind told me that now was as good a time as any to take some of the dusty DVDs sitting on the shelf and trade them in for store credit.

Of course, I didn’t just get rid of 33 different DVDs when the winter cleaning bug bit. No. Actually, I wound up taking down a bunch of pictures from my wall and putting them away while rearranging some other pictures that I had hanging up. Also, about two weeks ago I took a bunch of old textbooks that I had laying around and gave them to one of the undergraduates that I advise in the fraternity to trade in during book buyback. Made a few bucks off of that whole scenario and managed to clean off a bunch of shelf space on my bookshelves. But this entry is about the DVD clean out, so allow me to get back on track!

And so we have Round Three of trading in my old, dusty DVDs to F.Y.E. for store credit!

Amid the happiness that I feel about turning old, dusty DVDs into a functional asset (store credit) I have to admit that there’s something unsettling about the process of trading in these DVDs. I’m not sure what it is – it could be the fact that I’m receiving back in store credit only a fraction of what these DVDs originally cost me (and a small fraction, by the way). I don’t know what it is, but that unsettling feeling is more than squelched by the dual fact that I have less unused/not-going-to-be-used stuff laying around my bedroom and that, in return for getting rid of this stuff, I have a new functional asset in F.Y.E. store credit.

So how much did I earn in store credit for trading in all of these DVDs? Take a look at the list below and find out for yourself!

I think that part of the unsettling feeling is seeing an entire season of the Smallville television series bringing in $2.50. I mean… good grief! Two dollars and fifty cents?! I probably paid $25 for that box set when it was released for goodness’ sake! Geez…

Anyway, in total I generated $77.53 in store credit from Round Three of my DVD trade-ins this year. As you might recall from Round One and Round Two, I’ve been trading in my old, dusty DVDs throughout 2010. In total, this year I generated $244.22 in store credit at F.Y.E. by trading in some of these unused old DVDs that were doing nothing more than taking up space in my bedroom. Add in another $25.25 that I generated by trading in some old video games to GameStop and another $54 that I generated by returning an unopened video game controller to Walmart and I’ve done pretty well this year in generating usable assets from completely unused stuff laying around my bedroom. 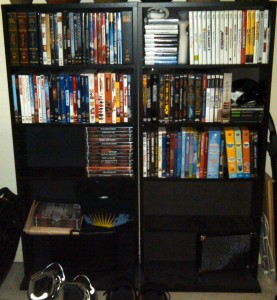 What remains of my once huge DVD collection

And I don’t think I’m done yet.

Take a look at the picture to the right to see what remains of my DVD and video game collection. It’s getting pretty scarce, don’t you think? Let me walk you through this thing starting with the media tower on the left side of the picture. The top and second shelves are filled with different DVDs that I haven’t yet traded in or that I’ve decided I’m not trading in. The third shelf with the stack of DVDs on it are product that I bought at a discount to give away on one of the wrestling sites that I own. The fourth shelf contains a few t-shirts that I’ll also being giving away on that wrestling site and a three-pack of DVDs that I received for Christmas. So in this media tower I really only have two shelves worth of DVDs that you can actually count towards my collection.

And that’s it. That’s what left of my DVD and video game collection. Pretty amazing, I think – especially when you consider that I once had probably 400 or so DVDs and video games in my college/post-college collection. What about you? Are there any old DVDs or video games laying around your house that you can trade-in to a store for some credit or sell on eBay for a few bucks?

If so, then what are you waiting for?!