Last night the Monmouth University Hawks defeated the Quinnipiac University Bobcats by a score of 72 – 60 in front of 1,374 fans at the MAC Center in West Long Branch. Leaders for the Hawks included Ed Waite with 17 points, Whitney Coleman with 16 points, and both Will Cambell and Travis Taylor each with 14 points. The Bobcats had some decent performances by James Johnson and Dave Johnson who each had 14 points.

What I liked about last night’s game (aside from the surprising number of fans in attendance) was the aggressiveness that the Hawks played with – especially in the second half. Many of the fans have been waiting all season to see the Hawks really take it to their opponents in the second half and the team did not disappoint last night. About halfway through the second half the Hawks caught fire and, led by Whitney Coleman, seemed almost unstoppable. The momentum caused the Quinnipiac coach to call a time out, but the Hawks raged back after the interruption. In terms of competitiveness, last night the Hawks played as good as I’ve seen them this season.

I generally don’t like to talk negatively of the opposing team in these brief reviews, but it really seemed to me that one of the main players on Quinnipiac had no idea where he was or what was going on. Anyone who was at the game probably noticed the same thing, but #12 seemed (to me at least) like he was hungover or just not mentally focused on playing a decent game. And it really showed in his stats – 4 points and 5 personal fouls. The guy had more fouls that points and he’s one of their major players! Weird.

Some quotes from Monmouth Head Coach Dave Calloway from the Asbury Park Press:

“I thought we did a great job on them (Feldeine and Rutty) and even their other guys,” said Monmouth coach Dave Calloway.

“They’re (Quinnipiac) solid. Obviously that’s their two best players and we held them both under their average.”

“If you hold the other team’s two best players and don’t allow anyone to really go off – and they have other players who could have gone off – it was an all around good defensive game.”

No comment from Coach Calloway regarding when a Quinnipiac player inadvertently landed on him during the second half as he was trying to save the ball from going out of bounds. Seeing one of the players land directly on the Coach got a reaction out of the crowd – it was something that you don’t see everyday at the MAC Center!

Special shout outs to one of my roommates for coming along to the game and two of our fellow Sigma Pi alumni who were at the game. It was fun to catch up with them over a few beers in The Varsity Club. And I’ve been working on making the pictures that I take look better before posting them on the blog, so please let me know if you think these are better and clearer than previous pictures. Check out the twenty or so pictures from the game below. 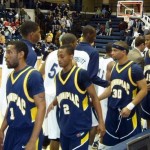 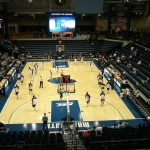 Warming up before the game 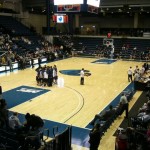 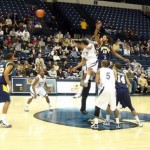 Travis Taylor wins the tip off 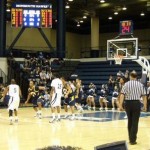 The Hawks on Offense 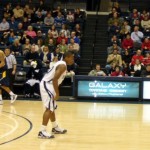 Will Cambell on Defense 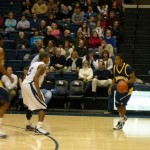 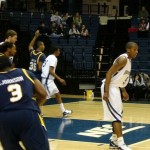 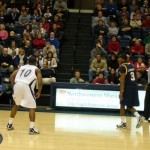 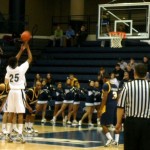 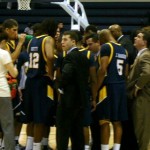 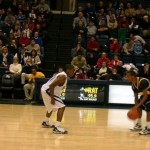 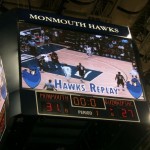 The Score at the Half 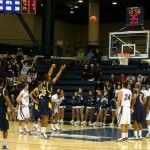 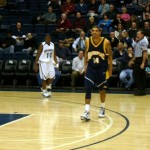 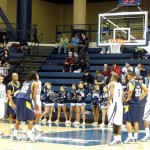 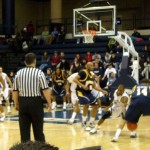 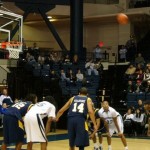 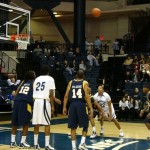 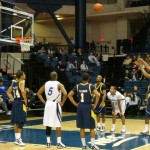 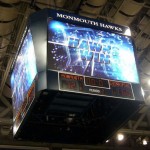 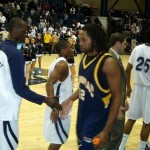