It was right about this time last year when I posted an entry on this blog discussing how I owed more in taxes for fiscal year 2010 than I already paid. Don’t get me wrong, I pay taxes just like every other working person via the payroll tax, income tax, sales tax, etc. However, last year was the first time where I actually owed more money to the government because of earning money from jobs outside of my primary employment.

In other words, I did pretty well in 2010 so I had to pay extra money to the government for doing so well. To put it simply, free tax filing sounds good right about now. In total, I paid $3,564 to the Internal Revenue Service and another $374 to the great State of New Jersey. 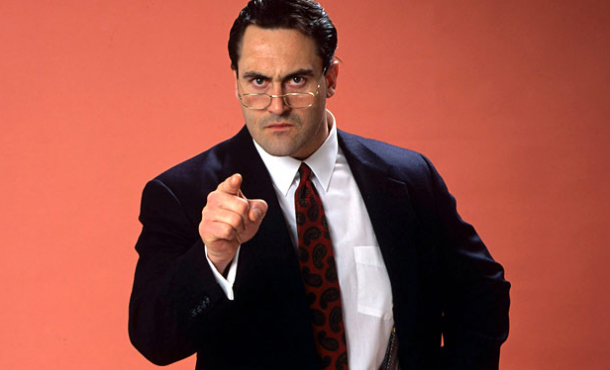 "You can pay me now or you will pay me later." - Irwin R. Schyster

Oh, you might remember that I used a picture of former WWE wrestler Irwin R. Schyster in last year’s post. Well, I thought that the picture worked pretty well and was entertaining, so considering that I just uploaded a post that talked about WWE bringing WrestleMania to New Jersey, I figured that it would be great to bring back Mr. Schyster for this year’s tax news. And speaking of this year’s tax news…

I owe both the Internal Revenue Service and the State of New Jersey taxes again for 2011.

There are a lot of people who spend a lot of time trying to find ways to not pay the government according to the tax laws on the books. Unless you’ve got big-time scratch (and I do not), then it makes no sense to go out of your way to hide income or gains from the government. They’ll find out and they’ll nail you for it – so pay your damn taxes. The reason why I’m generally okay with paying these extra taxes is because I made a good amount of money last year.

I mean it’s simple enough, right? You make more money than you pay taxes on so you have to pay taxes on that excess income. Generally speaking, what’s the problem with that? Sure, we can get into a discussion about whether or not I should be taxed at the rate that I’m currently taxed at (I would suggest that I should be taxed at a lower rate). And yes, we can get into a discussion about whether the government uses my tax dollars according to my will or in a manner that I find efficient (the answer is “no” for both of those items), but that’s not the point of this entry. The point is that you should all want to pay more in taxes because if you have to pay more in taxes, then you must have earned more in income during the previous year. Let me repeat that:

The more taxes you pay, the more money you earned.

While I think that it sucks and I might be annoyed that I have to send a check to the Internal Revenue Service for some $3,200+ and to the State of New Jersey for some $450+, I’m glad that I worked hard enough and earned enough money to increase my tax liability. Although I do have a bone to pick with the IRS over one aspect of my taxes (the student loan interest deduction), but I’ll get to that in an entry to be posted in the next few days). Also, this year I was better prepared for a higher tax liability because of being so shocked that I owed money last year. So I’m prepared to pay the government this year with very little impact on my regular cash flow.

And that’s a good thing… because nobody wants to open their door and find Irwin R. Schyster waiting on their doorstep looking for a check. No thanks!