You are here: Home / Health Ideas & Gym Stories / Observations from My First Few Days at the New Gym

A few days ago I posted that hilarious Planet Fitness commercial with the big lunk telling everyone that he lifts things up and puts them down. I have to admit that I go back and watch that commercial every once in a while because it really is funny – especially if you’ve ever seen these idiots while at the gym! By the way, I use the term “lunk” because that’s what is plastered on the wall of my Planet Fitness. I can’t remember the exact definition, but a lunk is that idiot that drops weights on the floor, grunts and snorts while lifting weights, and drinks some liquid out of a gallon container.

Come to think of it, I think I might be friends with some lunks…

Anyway, a few years ago (winter 2004 through summer 2005) when I was consistently working out, from time to time I’d post some of my observations while at the gym. Typically, I’d write a few lines about the outlandish activities that I’d see certain people engaging in when they should have been focusing more on working out. You can go back through this blog and find some examples if you want – or you can scroll down to read some early observations from my time at Planet Fitness.

Actually, I only have one observation of a weird type of person at the new gym and in the grand scheme of things, this observation is minor. Maybe there will be more examples of insanity as I go along at this place, but until then, enjoy!

The Person with Too Much Perfume/Cologne
I just don’t get the thought that goes behind this one. One week ago today I went to the new gym for my first workout session. The goal was to focus solely on acquainting myself with the different cardio machines. It was a pretty successful trip until the last 5 – 10 minutes. Here’s what happened…

After I spent about an hour on the treadmill, I went to ride the bike for a little bit. By the way, the stationary bike is a piece of cardio equipment which I typically try to avoid – something about peddling and getting nowhere bothers me. But I’m committing myself to trying and using new pieces of equipment at the gym and last Monday I wanted to get on the bike for a little bit. 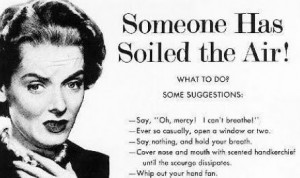 Don't over scent yourself when going to the gym!

My intent was to spend about 15 minutes on the bike and then move on to another piece of equipment that I typically wouldn’t use. About 5 minutes into my bike ride a little old lady (she had to be in her late 70’s) hobbled on to the bike next to me with what had to be her daughter on the bike next to her. Now, I don’t care who works out next to me or what they do, etc. But this little old lady, God bless her, was drenched in that little old lady perfume. You know the perfume – that stuff you can smell a mile away? And she was about a foot away from me. Not good.

After a few huge inhales filled with whatever that little old lady perfume is made of, I had to get up. The end result was that instead of 15 minutes on the bike, I did about 10 minutes and I wound up a little lightheaded. I thought to myself, “I’ll go hang out in the locker room for a minute and clear my head and then get back to work.”

So I get up off of the bike and walk to the locker room and some kid had just walked into the locker room ahead of me. This kid was DRENCHED in cologne. I mean DRENCHED! I’m not one to play the ethnic stereotype game, but this kid was of a certain ethnicity that is frequently associated with wearing too much cologne and boy did he fit the bill. It was intense.

As you might imagine, after getting lightheaded from the little old lady and then getting smacked in the face with enough cologne to scent 50 men, I had to call it a day.

I’ve been back to the new gym twice since last Monday and I didn’t encounter the over-scented problem again so hopefully it was a one-time, rare occurrence!