“Travis’ mother contacted me by phone and declared that they have decided that her son needed to move on to further enhance his chances of playing in the NBA,” [Dave] Calloway said.

“We are truly disappointed in Travis’ decision to leave Monmouth,” said Calloway. “His teammates stood by him this past season and were counting on him this upcoming year. “We wish Travis the best and truly hope he finds what he is looking for.” 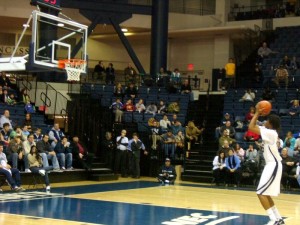 Taylor is Leaving the MAC Center Next Year

Talk about a major loss for a young program that was trying to build themselves around Taylor’s athleticism and abilities. As a season ticket holder, supporter, and fan of the team, I can tell you that there were some games during Taylor’s seven game suspension last season that were almost too harsh to watch. As one of the comments on The Hawks Nest blog says, “If you took one of your polls with the question being ‘What would be the most devasting thing that could happen to the MU basketball program?’ I guarantee you that it would be ‘Travis Taylor transferring.’

Another one of the comments said that Taylor isn’t even close to being an NBA-caliber player and while most people will probably agree with that statement, I think that if the kid sees an opportunity to reach a higher level by moving somewhere else, then you can’t denigrate his choice. However, you have to start wondering just what the heck is going on over at Monmouth University in their men’s basketball program. Not only is Travis Taylor leaving the team (and the school), but both Dutch Gaitley and George Barbour have quit the team. Rumors suggest that these two have the equivalent of irreconcilable differences with Coach Dave Calloway. Lord only knows what type of stuff (drama?) is going on behind the scenes with the men’s basketball team…

No matter what happens, though, I’ll be back in my seats next season to enjoy some basketball at the MAC Center. I just didn’t think that I’d be watching a completely different team play when only one of this past season’s players (Whitney Coleman) was graduating!